The Galaxy A8+ (2018)’s Pie update is a 1233 MB download over the air and brings Samsung’s One UI interface with plenty of new features, both small and big. The software version is A730FXXU4CSCD. The Indian release also has the February 2019 security patch despite coming in two weeks after the update was released in Russia; in fact, Russia has received two Pie updates till now and neither include the March patch, but we can hope Samsung will fix that once it starts updating the A8+ (2018) with Pie more widely.

If you own a Galaxy A8+ (2018) and live in India, you should be able to download Pie over the air by tapping Download updates manually in the Settings » Software update menu. We’ll update this article once we have the firmware for the update available in our database. Do tell us if you have received the Pie update on your A8 (2018) or A8+ (2018) by leaving a comment (mention your country as well if you have got the update outside India or Russia). 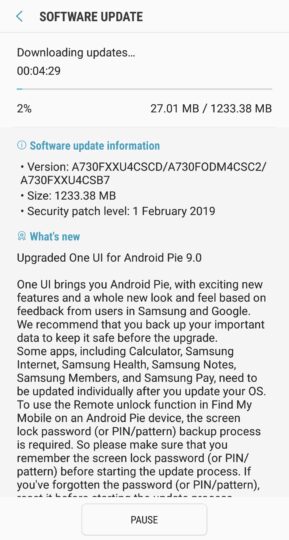