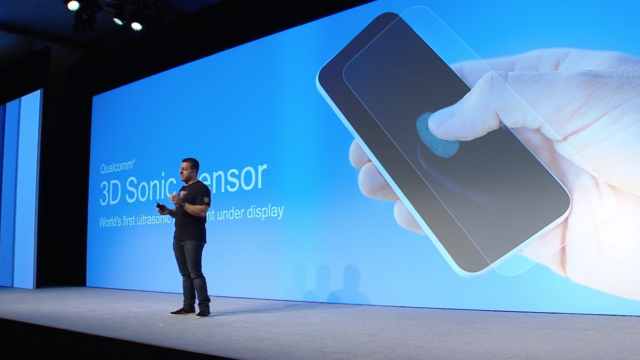 Qualcomm made a number of announcements at its Snapdragon Technology Summit, including one for what may very well be the Galaxy S10 display fingerprint sensor. It has long been reported that the Galaxy S10 will come with the best in-display fingerprint sensor that Qualcomm has to offer. The company provided more details about this component yesterday.

Qualcomm is calling it the 3D Sonic Sensor. The rumor mill has been in agreement that Samsung will opt for an ultrasonic instead of an optical in-display sensor. Qualcomm says that the sensor will ship in mobile devices available in the first half of 2019.

It’s past due for Samsung to launch a smartphone with an in-display fingerprint sensor. Many of its Chinese rivals have already done so but Samsung has been waiting for the ultrasonic solution.

Optical sensors work by shining light on the finger when it’s pressed on the display. This is done to visually check the fingerprint against a pattern previously stored. It’s cheaper than ultrasonic but not as reliable or secure. It’s theoretically possible to fool the optical sensor with an accurate image of the fingerprint.

Qualcomm’s 3D Sonic Sensor does things a bit differently. It doesn’t just store a flat image of the finger pressed against the display. The “ultrasonic” capability is what enables the sensor to develop a 3D mold of the finger by bouncing sound waves off the skin. It captures incredible detail right down to the ridges and pores that are unique for everyone.

This capability makes the sensor more accurate and safe. The security community is yet to perform real-world tests on this sensor. At least from a technological perspective, it shouldn’t be vulnerable to spoofing with a mere image of the fingerprint.