Samsung details the idea behind its foldable Infinity Flex display

The company shared some details about the foldable display today. It has also provided more insight into the idea that led to the creation of the Infinity Flex display.

The idea behind the Infinity Flex display

Samsung started out with a simple question in mind. What if the smartphone display could change in size? It thus began developing a new category of display which will give way to an entirely new way of using the smartphone. The new display form factor that Samsung has created seamlessly unfolds into a 7.3-inch display. This means that one device can function as both a smartphone and tablet.

The foldable phone is going to have a smaller external display as well for this reason. Glass doesn’t fold naturally so Samsung had to develop a new material for the cover window that’s not only flexible but also durable. Samsung says that the display can be folded and unfolded countless times without issue. It has developed new software experiences as well to take full advantage of the foldable display. Features like multi-active window will enable users to run three apps simultaneously when the display is folded out.

Samsung SVP Justin Denison said during the company’s keynote today that mass production of the Infinity Flex display is merely a matter of months away. We can thus reasonably expect the foldable smartphone to arrive at some point next year. 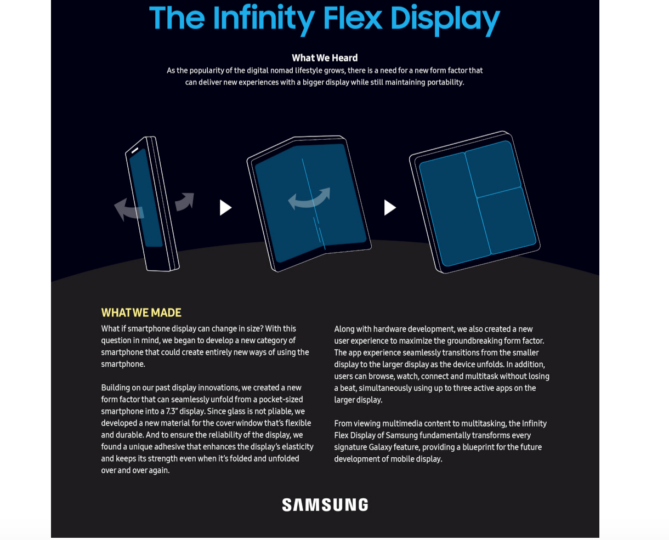 According to a new report out of South Korea, the Samsung foldable smartphone release date might be scheduled …

Microsoft xCloud or Project xCloud will have support for Samsung’s smartphones and tablets. This was con …

Samsung hasn’t mentioned an exact date for the Galaxy S9 Android Pie beta program yet, but the company h …

In a bid to get as many developers on-board before its foldable smartphone hits the market, Samsung showcased …

The Samsung One UI is official today. Samsung is basically reinventing the wheel with this new user experience …