After rumors and teasers, the Galaxy On7 Prime is finally going on sale in India on January 17. Samsung India is sending invites for the launch event of the Galaxy On7 Prime. The phone was made official on Amazon India last week without any information about pricing or availability.

Galaxy On7 Prime will come with Samsung Mall

Samsung’s invite says the new phone will come preloaded with Samsung Mall. While the invite doesn’t mention what Samsung Mall exactly is, the Galaxy On7 Prime marketing page on Amazon India spills the beans about the Samsung Mall.

Samsung Mall is a shopping app with a Bixby Vision-like tech for shopping based on image recognition. Users can shoot or use existing pictures of any product to initiate a visual search for shopping across multiple shopping sites. The app also comes with an all-in-one shopping and universal cart to compare, review and buy products from multiple sites through a single interface. Furthermore, the app also features an AR tool for trying some of the products virtually before buying. As for the specifications, the 4G VoLTE-enabled device will come with a 5.5-inch FHD display, Octa-Core Exynos 7870 processor, 13-megapixel front and rear cameras with F1.9 aperture, dual SIM slots, microSD slot, and a fingerprint reader. It sports a metal unibody design and will come in two configurations: 4GB RAM/64GB storage and 3GB RAM/32GB storage.

The Galaxy On7 Prime in India will also come preloaded with Samsung Pay Mini – a stripped down version of the Samsung Pay. It lacks MST and NFC-based payment options and instead relies on UPI (Unified Payments Interface) and mobile wallets like PayTm for making payments.

Like other On series phones, the phone is for online-only sales and will be available as an Amazon-exclusive in India. The phone will be available in Black and Gold color options, and the pricing will be announced at the event. 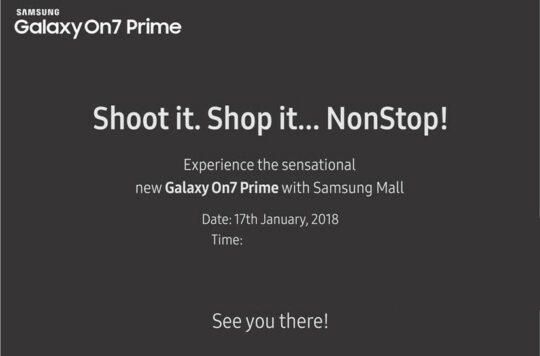