Samsung Flow will support all Windows 10 devices in the future

Samsung support confirmed in reply to a consumer query that the Samsung Flow app would be released for all Windows 10 PCs after the next major Windows 10 update (estimated early April). Apart from fingerprint authentication using a Galaxy smartphone, the app also lets users check their smartphone notifications and reply to them from the PC, transfer content, and share app activity from the paired smartphone. The app was launched two years ago along with the Galaxy S6 and Galaxy S6 edge. 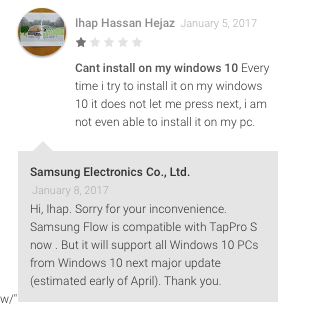