The Galaxy Note 7 has caused a lot of trouble not just for Samsung but for the people who purchased the flagship. Samsung initiated the first recall a couple of weeks after the handset was released so pre-order customers had to return their original unit to get a replacement unit. They had to go through the process once again when Samsung confirmed the second recall after the Galaxy Note 7 was discontinued. The company has compensated owners in different ways ever since, Samsung France appears to be putting extra effort in showing its gratitude to those who purchased a Galaxy Note 7.

The exchange and replacement program is already up and running in France but one of our readers has told us that Samsung France has been sending letters in the mail in which it apologizes once again for the Galaxy Note 7 fiasco. The letter comes with a free 128GB microSD card as compensation over and above the 100 euro discount that customers received if they exchanged their Galaxy Note 7 for a Galaxy S7 or Galaxy S7 edge.

It also states that Galaxy Note 7 customers can enter an SMS contest to be among the 1,000 lucky souls who will be awarded a free experience in Samsung Life Changer Park, the company’s virtual reality amusement park in Paris. Customers will be notified via SMS when the contest opens tomorrow, all they have to do is text back Samsung and the first 1,000 customers to text back will win the VR Park experience. The winners will be able to choose if they want to attend the experience on December 20 or December 27. Samsung will take care of all the logistics and transportation so the winners won’t have to pay anything, they will also be allowed to bring one guest along with them for the experience.

Samsung France is clearly pulling out all the stops here and that’s not necessarily a bad thing, after all, it does want customers to accept its apology. There’s no better way of doing that by giving way free stuff. 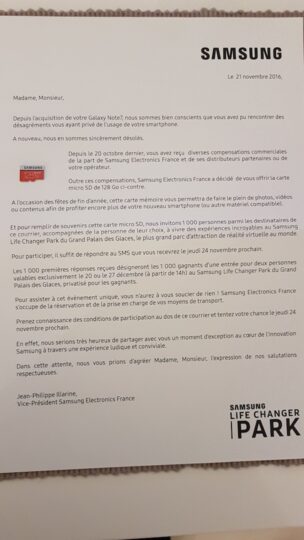