When Samsung took the wraps off the Galaxy Note 7 in Germany, it revealed that it would start shipping pre-orders of the handset on Tuesday, August 30, which is three days before its official launch in bricks-and-mortar stores. However, it appears that the firm has already started distributing handsets to consumers in the region as several readers of All About Samsung have reached out to the publication with proof that their device has arrived in the post.

All of the customers who have already received their Galaxy Note 7 in Germany have two things in common: 1) They all opted for the Black Onyx model with 64GB of storage, 2) They selected the Gear VR as their free gift. What’s a little strange about this early shipment is that it’s coming directly from Samsung’s warehouse in the Netherlands, and the firm, unlike T-Mobile and Verizon, doesn’t have a habit of shipping out handsets before their intended release date. 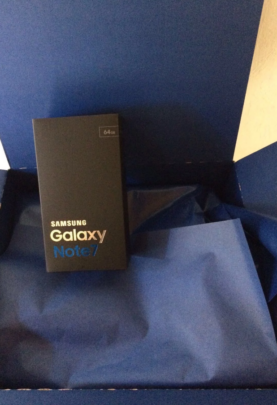 Have you pre-ordered the Galaxy Note 7? If so, have you received it yet? Be sure to let us know in the comments section below.