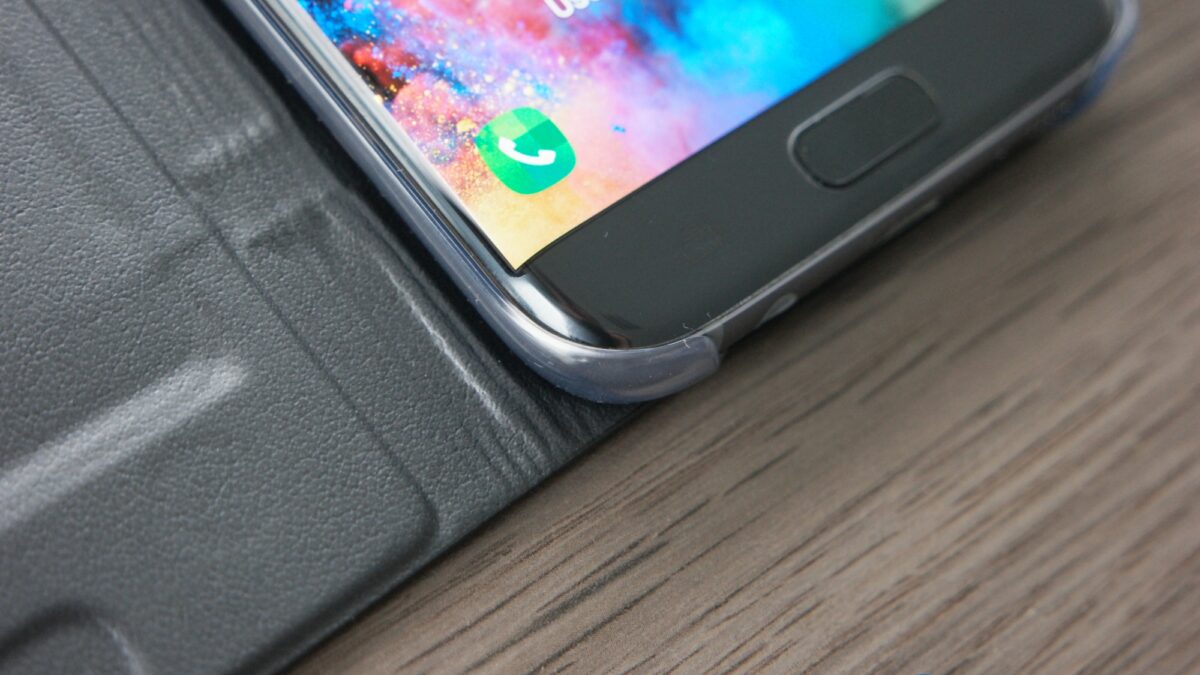 Note: We tested the accessories for the Galaxy S7 edge as we didn’t have a Galaxy S7 on hand.

The LED View cover for the S7 edge is the one I liked the most. It has a leather finish that makes it feel very premium, which isn’t surprising considering how premium Samsung’s new handsets are. Like you would expect from an official case, the LED View cover fits snugly and the cutouts are on point. On the inside, you have two slots for putting in credit/debit cards and money bills.

The cover has a hidden LED display on the upper side at the front. The LED display shows the time and notifications for calls and messages. That’s it – there’s no third-party integration whatsoever, so developers can’t take advantage of the cover’s functionality. There are a couple of settings for the cover, however. Over in the accessory tab on the phone, you can set different images for your contacts, and you can also set what the lid does (basically, choose between turning off the screen when the lid is closed or letting it remain as it is).

When you get a call, you can swipe the part where the LEDs are shown in order to answer or dismiss the call. The same is the case with alarms – alarms are shown with an arrow for turning them off. You can’t snooze them, so that’s a negative aspect.

The Galaxy S7 and Galaxy S7 edge come with the Google Play Music app out of the box instead of Samsung’s own music player, which means you miss a great deal of functionality with the LED View cover if you use Google Play Music. With Samsung’s own app (which can be downloaded off the Galaxy Apps store), you get a cool visualization when music is playing, along with the option to turn the volume up or down when the cover is closed. Connecting the device to the charger brings up a neat battery animation and the battery percentage.

The LED View Cover is a very nice case, with a nice feel in the hand while protecting your device from accidental drops and nicks. Samsung could do more on the personalization font, however. For example, it would be great to have the option to design custom images for contacts. You know, like being able to see the name of the person scrolling on the display during an incoming call, which would make it so much better (Samsung, I hope you’re taking notes for the next iteration of the LED view cover).

Head over to MobileFun to buy the LED View Cover for the Samsung Galaxy S7 or Galaxy S7 edge.

If we talk about smartphones cases that look really good, Samsung’s Clear View cover ranks really high. It’s made of see-through plastic, with a soft leather touch on the inside. Closing the lid protects your phone nicely, and in contrast to last year’s Clear View cover, screen scratches shouldn’t be a problem as the cover comes with a protector placed inside. It continues to be a fingerprint magnet though, just like the phones themselves.

When the lid is closed, you can see notifications in the status bar, though you can’t interact with them. The only thing you see is the clock, and if you play music, you get music controls on the cover. Calls can be accepted and dismissed, and contrary to the LED View cover, you can both dismiss or snooze an alarm. Support for third-party developers is missing here as well.

Battery status and charging animations are also on-board. You can also hop into the settings menu to enable a dual clock for the case, which should come in handy when you’re visiting a place in another time zone.

The Clear View cover is special for the way it looks. It’s got a futuristic feel and covers the phone completely – protection and good design in a single package. The functionality could be better though – you can control music, alarms and calls, but can’t act on notifications when the case is closed. So this is one case you should buy for the looks instead of functionality.

Head over to MobileFun to buy the Clear View Cover for the Samsung Galaxy S7 or Galaxy S7 edge.

Samsung surprised us last year with its take on a smartphone keyboard with the keyboard cover for the Galaxy Note 5 and Galaxy S6 edge+. It wasn’t the most beautiful thing in the world, and the design has remained mostly the same this year. The case has a rubbery feeling that makes it nice to the touch.

The purpose of this keyboard is to let you type faster, but that wasn’t the experience I had. For example, for typing in a period, you have to press and hold the Alt key instead of long pressing the M key on which the period is located. It’s great for those still used to physical phone keyboards, but for those familiar with virtual smartphone cameras, the keyboard cover isn’t a recommended purchase. There’s also the downside that the fingerprint sensor becomes unusable as the keyboard hides the home button.

Grab the keyboard cover for the Galaxy S7 or Galaxy S7 edge from MobileFun.

The Clear Cover is a minimalist yet stylish cover that protects your phone from scratches on the back. The protection against drops is too minimal, and I reckon the cover will need to be replaced after a single drop to the ground. The back has a protector on this year’s edition of the Clear cover, to protect the phone against scratches from the case itself, which was a huge issue on last year’s official Galaxy S6 cases.

The minimal nature of the Clear cover means you can keep the original design of the phone visible from the front. To protect the screen, you can always pair the cover with a regular screen protector.

The Flip Wallet has the same design as the LED View cover, but with a soft touch finish and no LED display. The cover feels great, and you get credit card/debit card/money holders on the inside. The Flip Wallet is great for protecting the device from both scratches and drops. The cover is a snug fit once you slide the phone in.

Like the other cases, you can get the Flip Wallet/Clear cover from MobileFun. Here’s a shoutout and thank you to the retailer for sending these cases to us for review. Oh, and don’t forget to check out our review of the Galaxy S7 edge before you go out buying the device or its accessories.