Samsung announces the Galaxy A9 with a 4,000 mAh battery 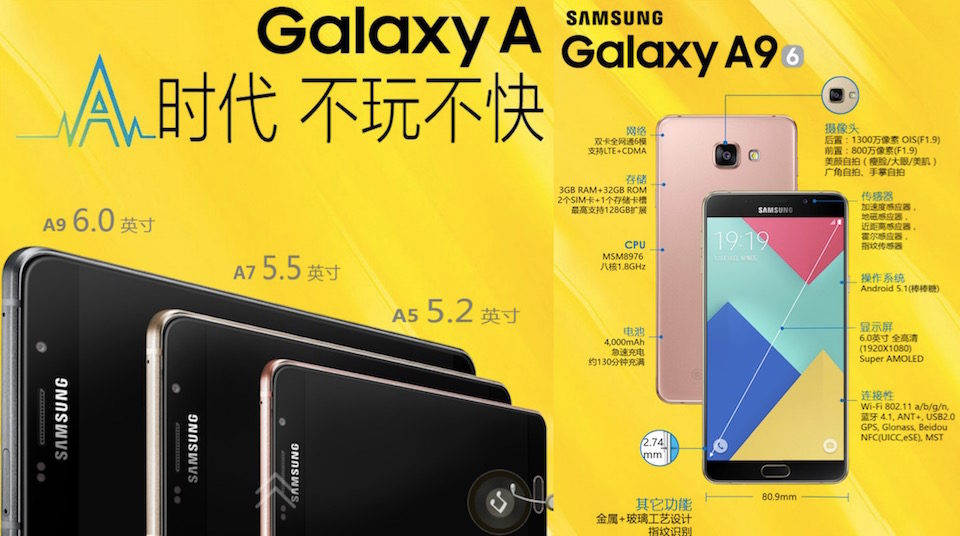 As we reported earlier today, Samsung has announced the Galaxy A9 in China today during its Galaxy A Party 2016 event. The Galaxy A9 is the most high-end smartphone in the Galaxy A lineup from Samsung, and it was leaked a number of times in the past few weeks revealing its specifications as well as physical design.

The Galaxy A9 features a huge 6-inch 1080p Super AMOLED display with 2.5D curved glass, a 13-megapixel primary camera with OIS and ƒ/1.9 aperture, and an 8-megapixel secondary camera. It runs Android 5.1.1 Lollipop, and comes equipped with a 64-bit octa-core Snapdragon 652 processor, which is coupled with 3GB RAM and 32GB of internal storage space. There’s a microSD card slot as well and it supports cards of upto 128GB capacity.

Even though the device is just 7.4 mm thin, Samsung has managed to pack in a huge 4,000 mAh battery in it, but its non-removable. However, such a huge battery shouldn’t give anyone a chance to complain. The glass-and-metal design of the Galaxy A9 is similar to what Samsung brought to the table with the Galaxy A5 (2016) and the Galaxy A7 (2016). There’s a fingerprint sensor that’s embedded into the physical home button.

The Galaxy A9, similar to other recently launched high-end devices from Samsung, comes with Samsung Pay. The company also showcased the recently announced Galaxy A5 (2016) and Galaxy A7 (2016) during the event along with the Galaxy A9. The device will be available in China later this month with pricing being confirmed at a later date.