There comes a time in every handset’s life when the end draws near. At that point, updates are stopped, with manufacturers moving on to newer handsets. Today’s sad news comes to the Galaxy Ace 4.

Twitter user Reuben Upstone inquired about Lollipop for his Galaxy Ace 4 (“Can you tell me when the Galaxy Ace 4 will get Lollipop?”), only to receive the following response from Samsung UK: “I’m afraid the Galaxy Ace 4 will not be getting the Lollipop update Reuben.” While it’s not the news anyone wants to hear after having owned a handset for less than a year, it still has to be told. This is even more disappointing, as it seemed as though, two months ago, the Galaxy Ace 4’s Lollipop confirmation was affirmed.

The Galaxy Ace 4 is not the only handset that has been turned down for the Lollipop update, however; it stands in the same circle as Samsung’s Galaxy S4 Mini, which has been denied the Lollipop update due to memory limitations. The GS4 Mini has 1.5GB of RAM and the Ace 4 has 1GB of RAM, so the memory limitation of the Ace 4 may be the problem here (although Samsung has not confirmed this).

Samsung’s update policy regarding handsets, if there is one, is somewhat mysterious and spontaneous, with devices such as the Note 2 (with 2GB of RAM, FWIW) still being Lollipop-eligible in certain regions, while other regions have a Note 2 that isn’t eligible. The same thing happened with the Korean manufacturer’s revolutionary Galaxy S3 and the KitKat update: international versions were denied the update while American GS3 customers were proud recipients.

Apparently, we’re discovering that Lollipop is a treat – and, for budget-friendly handsets, a rare one at that. 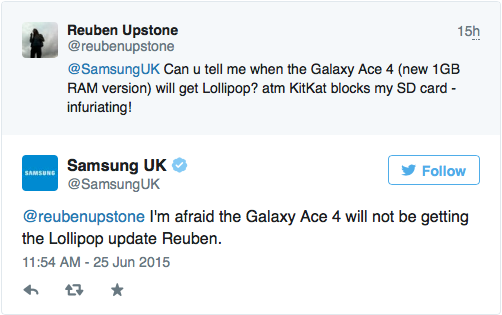