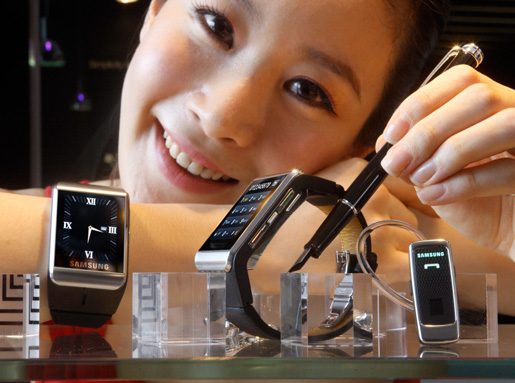 Samsung’s been accused of studying Apple too closely.

Even after the Korean manufacturer launched the Galaxy S3 and won Android consumers worldwide to the company’s popular smartphone, Samsung continued to examine Apple lines outside of Cupertino’s own stores on iPhone launch days to see what created the hype surrounding the fruit company. And Samsung took to its own YouTube channel to post a commercial or two surrounding Apple’s product launches.

But those days seem to be gone. Despite Samsung’s hard-hit budget and its share of disappointment in 2014, Samsung’s confidence in its products and the company’s abilities have grown tremendously. And this confidence includes its smartwatches. Samsung was asked about its impression of the Apple Watch pre-order launch in a CNBC interview yesterday. Samsung VP for Mobile Europe spokesman Rory O’Neill responded with the following statement:

There’s a lot of great brands in the industry. You’ve got Apple, Samsung, Amazon, Google, Facebook, Microsoft, and many others. What that does is create obviously tremendous competition. It means brands like ours invest nearly $14 million a day to invent new products, new services, that delight consumers in that market. So it’s great for consumers that you’ve got all these brands investing hundreds of millions and billions of dollars to create new services from their mobile products.

When asked about Apple and what the Apple Watch means for the consumer smartwatch market specifically, O’Neill responded, “We’re delighted that Apple’s followed us into this market.”

Samsung’s response is to be commended. The company made it clear that Apple has made an excellent decision, while acknowledging that Samsung itself has been a pioneer of the smartwatch market as we know it, back as early as 1999. And this becomes even more evident when you consider that Samsung created a smartwatch prior to the Galaxy Gear in 2013: the S9110, launched on July 22, 2009. Samsung referred to the S9110 as a “watchphone” (not a smartwatch), but the world’s first watch that could make phone calls was Samsung’s own SPH-WP10 launched on March 31, 1999. The SPH-WP10 provided 90 minutes of talk time.

The Gear S, launched in 2014, continues Samsung’s proud tradition of staying on the cutting edge of technology.

In the end, Apple Watch sales are ultimately irrelevant. Whether or not the Apple Watch is a success doesn’t change the fact that Samsung was one of the earliest pioneers in the watchphone movement. Apple Watch fans, when you make calls from your wrist, you have Apple’s rival to thank for it.