As opposed to the Galaxy Grand 2’s 5.2-inch display the successor is likely to have a 5.5-inch display with a 720×1280 pixel resolution. Underneath it may be powered by a 1.2GHz Snapdragon 410 quad-core processor from Qualcomm joined by 1.5GB of RAM and an Adreno 306 graphics processor. 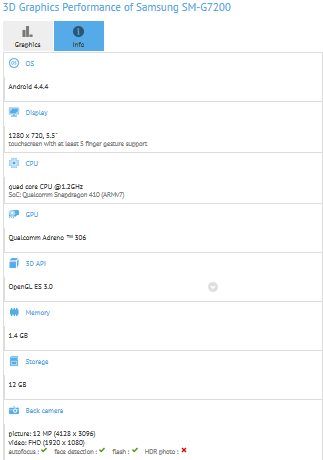 Significant improvements might be made to the camera as the Galaxy Grand 3 is now expected to come bearing a 13 megapixel rear facing camera and a 5 megapixel front facing camera.

Samsung Galaxy Grand 3 is expected to be unveiled in India first in the coming weeks. It will ship with Android 4.4.4 KitKat preinstalled.

Samsung was offering the Gear VR at no cost with initial pre-orders of the Galaxy S7 and the S7 edge. The company has now teamed up with T-Mobile to offer the Galaxy Grand Prime for free along with the purchase of either smartphone. The deal is valid “for a limited time” with the carrier not specifying […]

The online-only model in emerging markets has been instrumental in the success of many a player, especially newcomers. It appears as though veteran makers like Samsung have taken a leaf out of their books to give the end user the benefit of more direct supply chain. Not long back, Samsung teased a Galaxy Grand phone, presumably […]

Samsung isn’t done putting out new devices in the Galaxy Grand lineup, as it is now teasing a new Galaxy Grand smartphone over in India. According to a teaser sent out by the company in India, it is gearing up to launch “the Grandest Ever” device, and all signs point toward the fact that the […]

Samsung has been pretty consistent with releasing gold colored versions of its flagships phones in recent months, and now the Korean manufacturer looks to be turning its attention towards its mid-range devices. A gold variant of the Galaxy Grand 2 has been spotted on Samsung India’s website, giving future buyers of one of the company’s […]