When a company makes its flagship smartphone water- and dust-resistant, you can assume it is getting serious about bringing those features to more of its devices. Samsung, perhaps confident after adding ruggedness to the Galaxy S5 and releasing an even more toughened up variant in the Galaxy S5 Active, seems to be working on making its tablets rugged as well. The Korean manufacturer has applied for the “Samsung Galaxy Tab4 Active” trademark in Norway, which suggests that a rugged IP-certified version of the company’s latest budget tablet lineup could be on the cards.

Rugged tablets aren’t new – Sony has a couple of Xperia Z tablets with IP55/57 rating in its lineup, but the Galaxy Tab4 would be the first rugged tablet for Samsung if it makes it to market, possibly with an industrial tank-like design like the Galaxy S4/S5 Active. Of course, when you consider the fact that you’re less likely to drop your tablet in the toilet (unless you often do it, in which case we won’t judge) or use it as brazenly as a phone, a ruggedized tablet doesn’t exactly make that much sense, but it would still be better to have the feature than to rue it later when your tablet hits the pavement or finds itself under water.

Would you buy a tablet because of its water- or dust-resistance, or do you think it’s a feature that’s more useful on a phone? 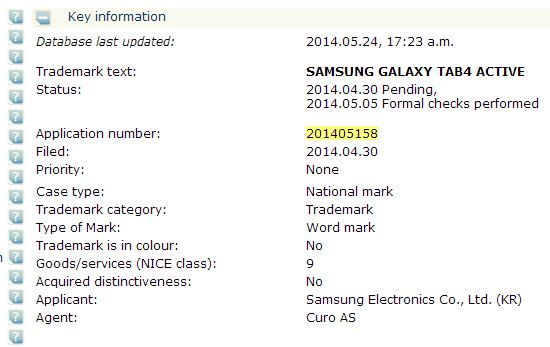 Indian consumers can now buy the smallest of Samsung’s Galaxy Tab 4 tablet lineup. The Galaxy Tab 4 7.0 has gone up for sale in the country, following the launch of the 8-inch and 10.1-inch models earlier this month. As expected, Samsung has directly launched the 3G-enabled variant, a move unsurprising given the lack of […]

Samsung has announced that it is partnering with Barnes and Nobles to create a special edition of the Galaxy Tab4, called the Galaxy Tab4 NOOK, aimed at those who love to read. Books are something that have never been big in Samsung’s content ecosystem, and it looks like the company is taking the easy way […]

There’s a lot of stuff that happens in the tech industry, something that is especially true when it comes to giants like Samsung. If you missed out on some (or all) of what happened in the last 24 hours or so, well, here’s a recap of all the big things that went down. The first […]

Samsung announced the latest Galaxy Tab series on April 1st, the Galaxy Tab4, which is available in 7-inch, 8-inch and 10.1-inch variants and is aimed at the low-end tablet market. Like previous years, the Tab4 series comes with specs that are nothing to write home about, but will differentiate itself with the design and pricing. […]

Samsung recently announced its Galaxy Tab4 series of mid-range tablets, but as is always the case, the company didn’t offer any details on pricing. But thanks to Dutch retailer Tabletcenter, we can put a price on each of the Galaxy Tab4 tablets – the Wi-Fi-only 7-inch, 8-inch and 10.1-inch models are priced at €199.99, €269.99 […]