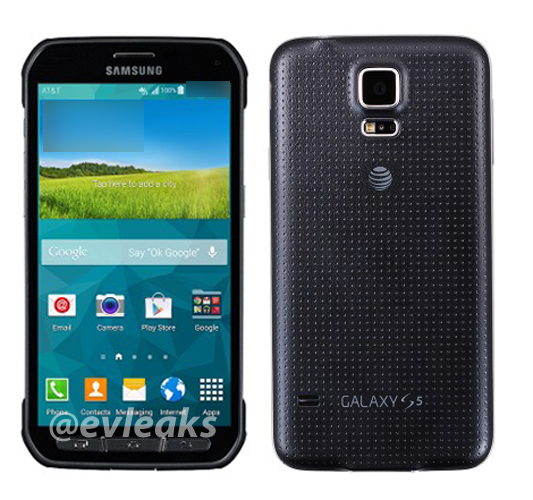 We don’t really need any more leaks to show us what the upcoming Galaxy S5 Active looks like, thanks to a handful of videos that have shown the device from every angle and ruined any surprises Samsung might have wanted to woo us with. But if you’re still not convinced, then you can take a look at the press render of the AT&T variant of the phone that has been leaked by @evleaks. It doesn’t show us anything new – we usually get a hint at the launch date of new devices through such leaked renders, but even that isn’t possible here as the date shown in the photo has been blurred out.

The Galaxy S5 Active to sport the same hardware as the Galaxy S5, including a 5.1-inch 1080p display, Snapdragon 801 processor, 2GB of RAM, a heart rate sensor (but no fingerprint sensor), and a 16-megapixel camera. It will be more rugged than the standard S5 (yet still keep the dotted texture on the back), and will also feature a new Active key, which can be assigned to different functions, including launching the camera and taking photos, with the latter coming in handy under water.