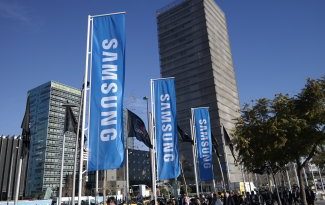 We are now in 2nd quarter of 2014 and Samsung has released 7 tablets, already. However, the Korean giant isn’t stopping just yet. Samsung has a brand new tablet lineup in the pipeline and its calling it the GALAXY Tab S.

The Galaxy Tab S will come in two display sizes, 8.4-inch and 10.5-inch, and will be the world’s first ever device to feature WQXGA (2560×1600) AMOLED display. The AMOLED display technology is known for its low power consumption and high contrast levels. Samsung has been using this technology in its smartphones and digital cameras since many years now. However, it’s a completely different story when it comes to company’s tablet devices. In 2011, Samsung unveiled the first ever tablet device with a Super AMOLED Plus display, the Samsung Galaxy Tab 7.7, but that was mainly to test the technology itself. Since then, Samsung has never used the OLED tech in any of its tablet devices. The main reason behind this was that the OLED technology itself was young and new, and it was nowhere near perfect. However, in recent years, the technology has evolved a lot and is now better than ever. The best example is Samsung’s latest flagship smartphone, the Galaxy S5, which was named as having the the best smartphone display ever, by DisplayMate.

The Galaxy Tab S will also be Samsung’s first ever tablet equipped with a fingerprint sensor, and just like with the Galaxy S5, it’s embedded in the home button. All fingerprint sensor related features from the Galaxy S5 will be present on the tablet, which include: Fingerprint Unlock, PayPal Payments, Private Folder and Samsung Apps login. Samsung will also be introducing a new feature, which will be unique to the Galaxy Tab S, it’s called Multi-User login. This feature uses Android’s native multi-user functionality but enhances it further by allowing the user to log in to his/her account simply by swiping a finger on the home button from the lock screen.

Design-wise, the Galaxy Tab S will be similar in design to the just announced Galaxy Tab 4, but will have much, much slimmer edges, which will make the device feel much more comfortable in hand and easier to hold. Back panel on the Galaxy Tab S features a perforated pattern, just like the Galaxy Tab 4 and the Galaxy S5. As explained by Samsung itself, the small holes on the panel follow a visual rhythm, providing tactile pleasure to the fingertips when users touch the back of the device. Samsung is working on new flip covers for the Galaxy Tab S, which clips on to the device using two proprietary connectors embedded in the back panel. Samsung will launch the Galaxy Tab S in two colours, Shimmer White and Titanium Grey.

On the software side, the device will come with Android 4.4.2 KitKat out of the box. However, at the moment our sources couldn’t confirm if the device will run Samsung’s new Tab/NotePro Magazine UX or Samsung’s standard KitKat tablet UX.

Initially, Samsung wanted to release a total of six variants of the Galaxy Tab S — WiFi, 3G and LTE. However, our insiders tell us that Samsung has just dropped the 3G variant for now, so Samsung will probably only release 4 variants. Usually, Samsung uses Qualcomm SoCs with its LTE variants, but not with the Galaxy Tab S. Our trusted sources tell us, Samsung is buying LTE modems from Intel and using them with their own Exynos 5 Octa (5420) SoC, as using in-house silicon reduces manufacturing costs.

Our insider sent us a few screenshots of Antutu benchmark and CPU-Z. In Antutu, the Galaxy Tab S scored 35,268 points, which means the device will be one hell of a beast and should be able to handle anything you throw at it! However, keep in mind that the benchmark was performed on early test software and results may differ with the final retail software.