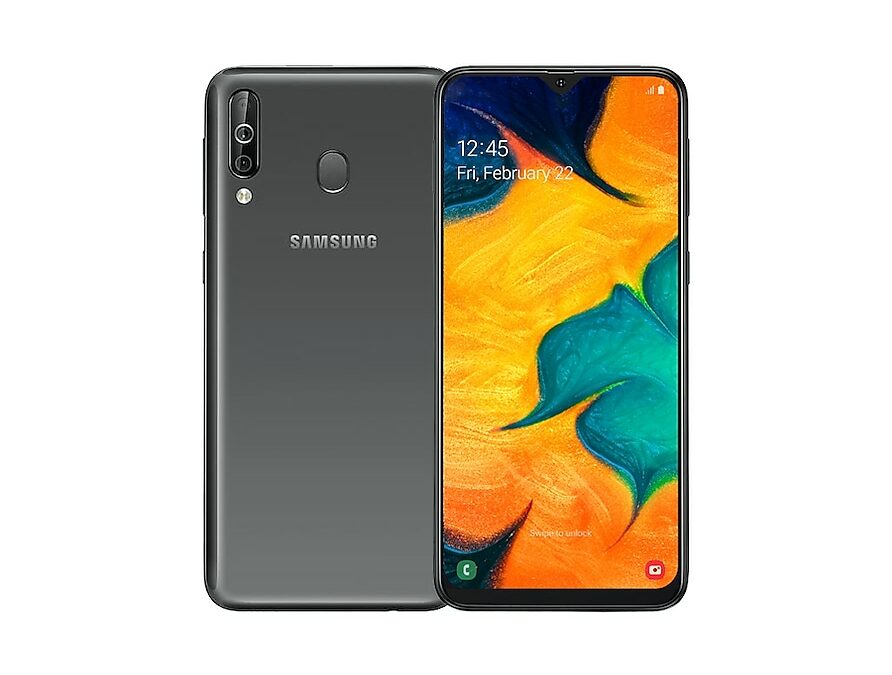 Samsung’s fortunes have changed dramatically in the Chinese smartphone market in recent years. The company which once commanded more than 20% market share is now staring at irrelevance with less than or around 1% share in the region. Despite many attempts, the Korean tech giant hasn’t yet found any solution to its growing troubles in the world’s largest smartphone market.

One of the ways Samsung is trying to improve its standing in the region is by launching China-exclusive models. Many of these devices, however, are slightly modified and rebranded versions of the models available outside China. The Galaxy A40s is one such device that sounds like a new model altogether but is basically a Galaxy M30 with minor tweaks for the Chinese market.

In rebranding the Galaxy M30 as the A40s for China, Samsung hasn’t made any external changes to the device. As a result of this, the A40s looks identical to the M30 and very similar to the M20. The similarities don’t end with looks but extend to the build quality and materials as well. The Galaxy A40s is also made out of plastic and has a slight gradient-like finish on the back. It weighs 175 grams and measures 159 x 75.1 x 8.4 mm in physical dimensions. 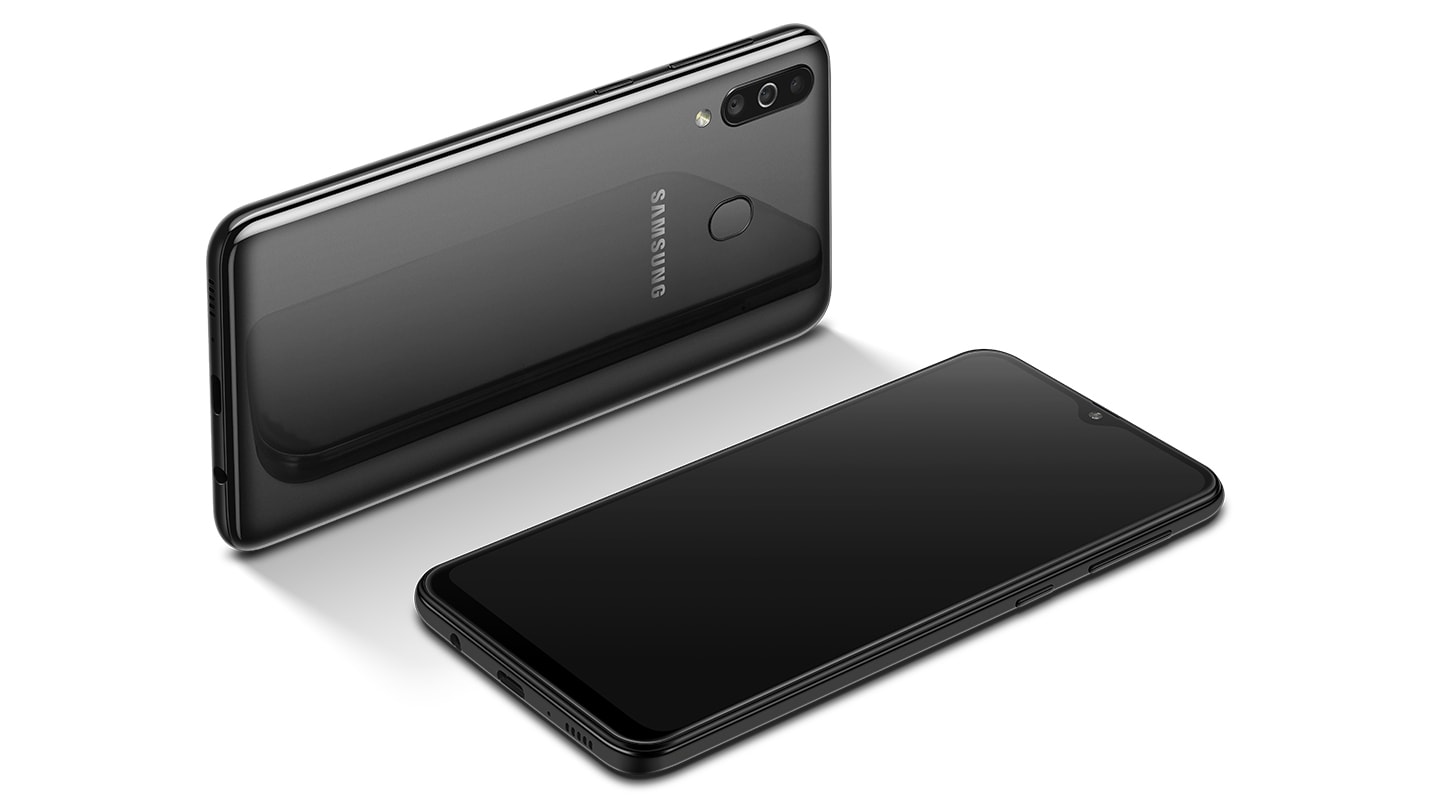 The front of the Galaxy A40s is occupied by a large Infinity-V Super AMOLED display with disproportionate top and bottom bezels. The volume rocker and power button are located on the right side of the device. On the left, the device has a SIM slot that supports two SIMs and a microSD card at once. Down below, there is a headphone jack, USB Type-C port, primary microphone, and a speaker grille in that sequence. The top of the device is clean and only has a secondary microphone.

On the back, there is a vertically-arranged triple-camera setup on the top left corner, an LED flash below the cameras, Samsung branding in the middle, and a fingerprint scanner just above it. 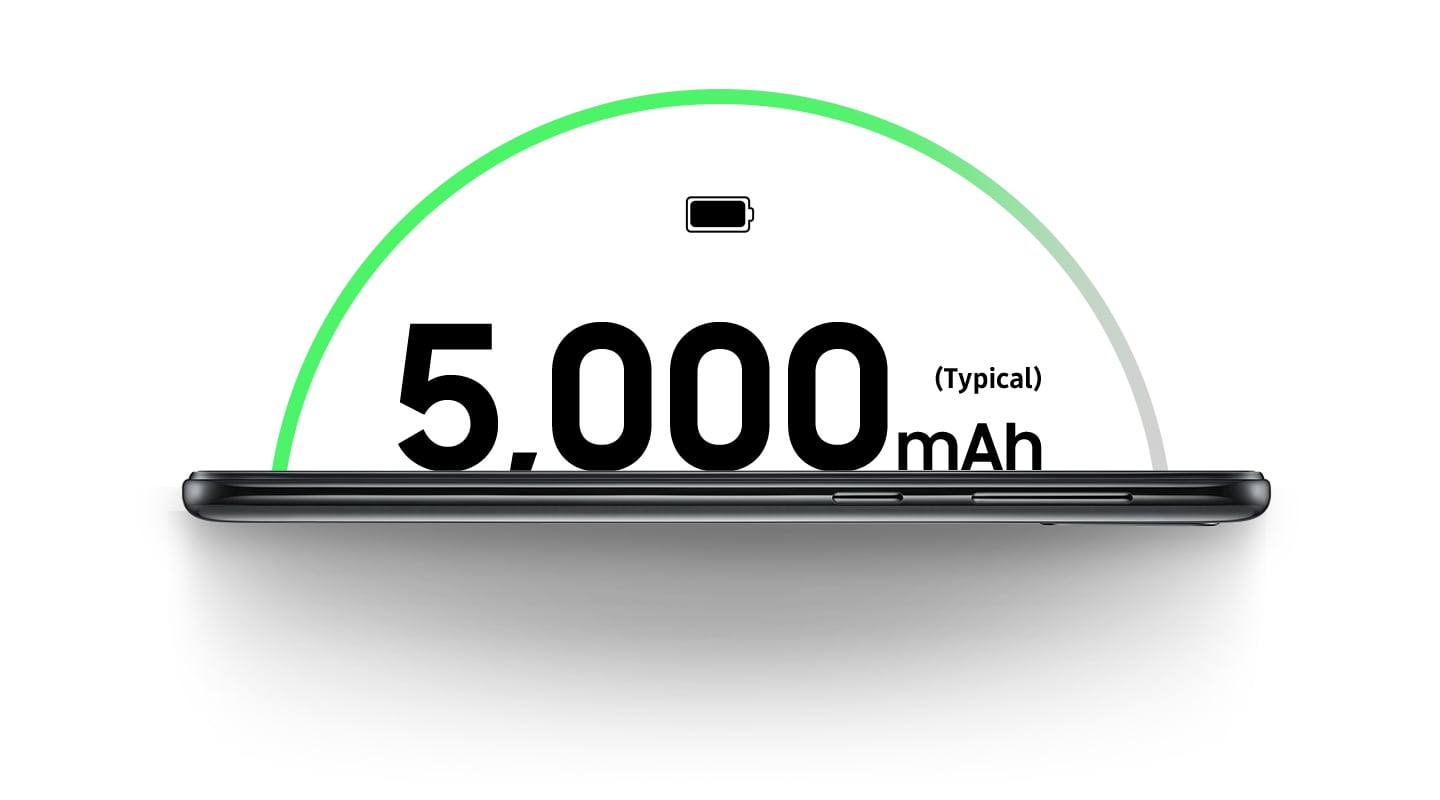 The A40s spec sheet is mostly indistinguishable from that of the Galaxy M30. The only two noteworthy differences are the former’s lower resolution display and newer software onboard out of the box – both of which are detailed below. 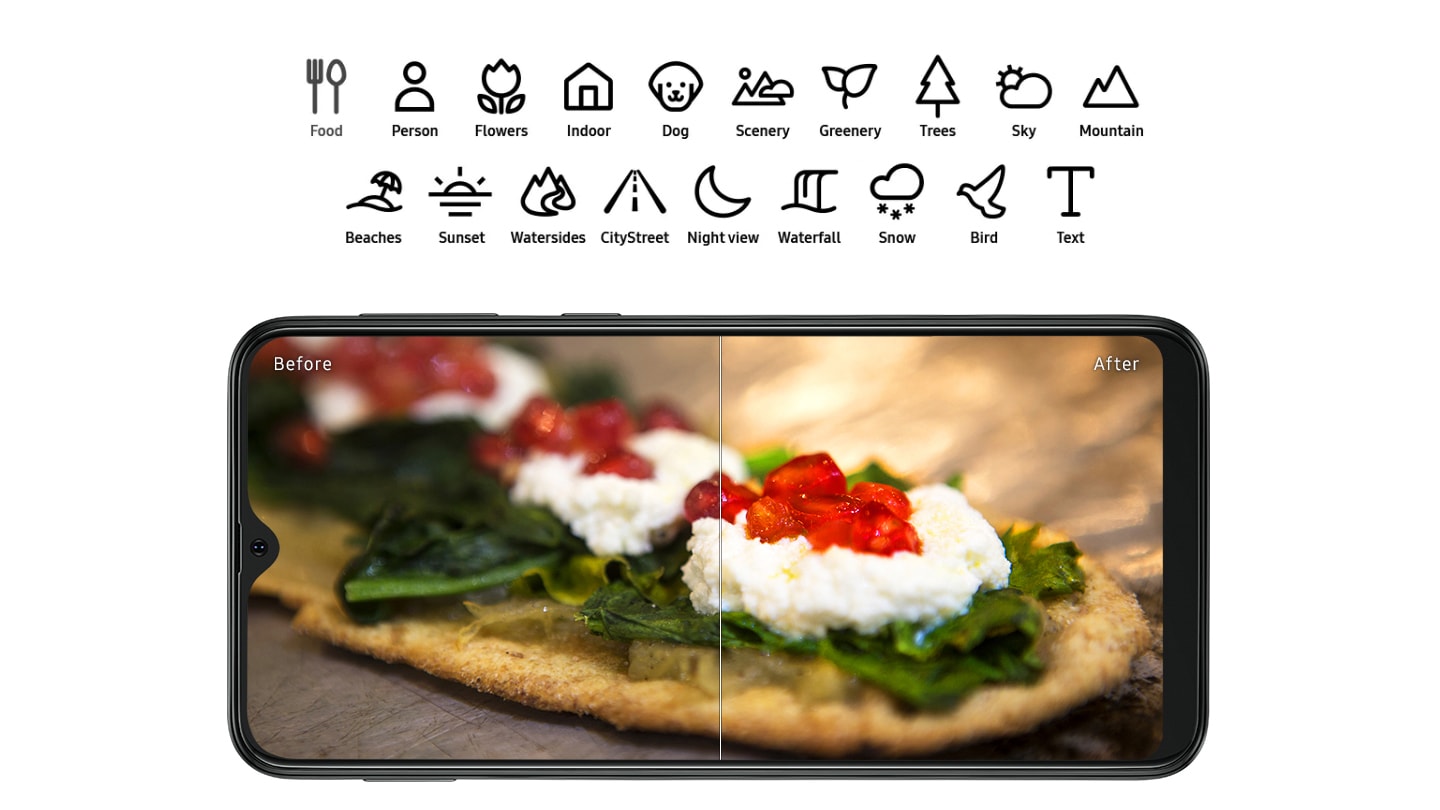 The Galaxy M30 sports a 6.4-inch Infinity-U Super AMOLED FHD+ display, which is one of its main selling points. For the Galaxy A40s, Samsung went with a 6.4-inch Infinity-V Super AMOLED HD+ display, identical to the one found on the A20. What this means is that the screen on the A40s is less sharp at ~268 PPI and has a V-style notch. Interestingly, both the Galaxy A30 and A40 sport displays with FHD+ resolution, which makes the HD+ display on the A40s a somewhat odd choice.

The Galaxy A40s has the same camera setup and capabilities found on the M30. So, the rear-camera setup consists of three cameras: a 13MP f/1.9 primary camera with PDAF, a 5MP f/2.2 ultrawide secondary camera with 123-degree FOV, and a 5 MP f/2.2 depth sensor for better bokeh effect. The rear cameras support standard Galaxy features such as panorama, HDR, Live Focus, Scene Detection, AR Emoji, etc. There is also an LED flash below the triple-camera setup to help take better pictures in low-light environments.

Onboard software is another area where the Galaxy A40s differs from the Galaxy M30. The former runs Android Pie with Samsung’s One UI on top out of the box, while the M30 launched with Android 8.1 Oreo and Samsung Experience UI 9.5. Though the M30 also received a software update to Android Pie and One UI towards the end of May, launching with the latest software version onboard may help the A40s in the long run with regards to future software updates. 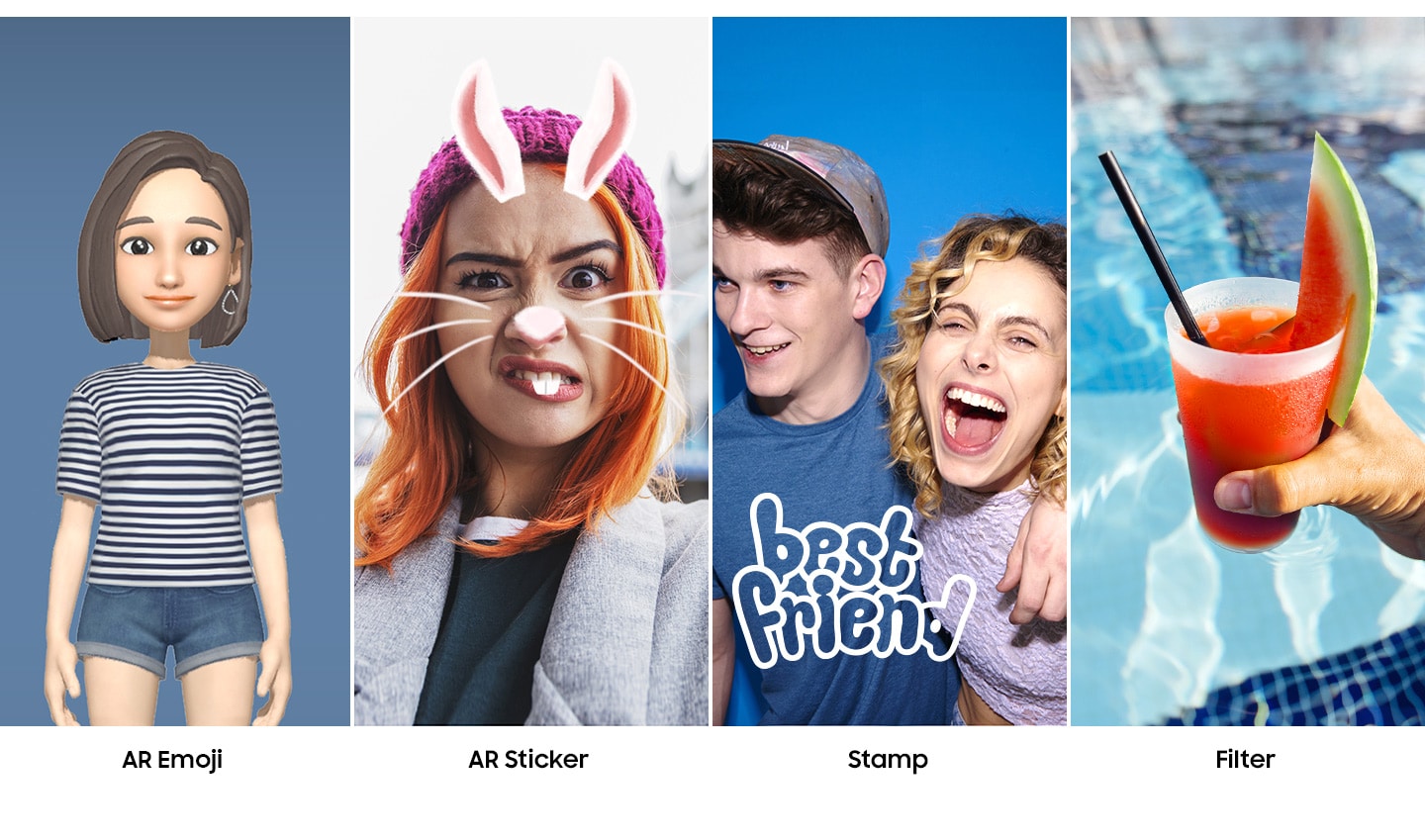 The software features on the A40s are fairly standard to what you would find on a budget Galaxy device running One UI. You can read our posts about One UI and Android 9 Pie to know what the onboard software brings to the table.

Samsung announced the Galaxy A40s in China in April 2019. It comes in a single 6GB+64GB storage configuration and is priced at CNY 1,499 (~$225) for the same. Color options include blue, black, and gold. The company hasn’t revealed if the A40s will be available outside China. It is doubtful though as the Galaxy M30 is already on sale in many markets.

You can follow our coverage of the Galaxy A40s to learn more about the device. You can download firmware, Samsung APKs, and wallpapers for the Galaxy A40s and all other devices for free from our website. Consider upgrading to our optional premium plans that offer additional benefits such as expert support, faster downloads, giveaways, ad-free browsing, dark mode, and more for a premium SamMobile experience.