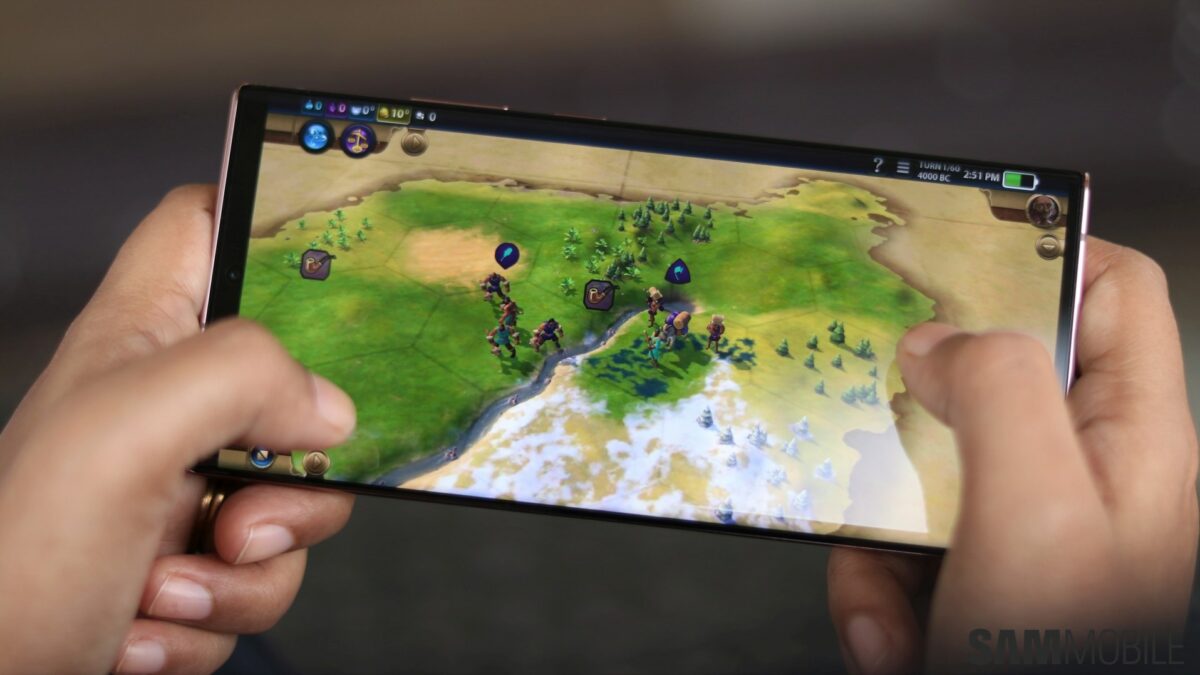 Samsung has the best interest of mobile gamers at heart. This is what the promotional material would have you believe, but this often seems to be a marketing stunt more than anything else. Don’t get me wrong; Samsung’s partnerships with Epic Games or Microsoft’s Xbox arm, for example, can lead to interesting things such as custom Fortnite skins and Xbox Game Pass Ultimate bonuses for early Galaxy Note 20 / Galaxy Tab S7 adopters. However, these benefits seem to be more of an expression of Samsung’s marketing skills rather than a reflection of its ability to understand and cater to the needs of mobile gamers.

It’s tempting to back this up by highlighting the difference in graphical performance between Samsung’s in-house SoCs and Qualcomm’s solutions; or make a big deal about how customers in some markets are getting the short end of the stick with the Exynos-powered variants. But that’s a far more complex problem than Samsung’s seemingly false attitude towards mobile gaming.

To give you a practical example, Galaxy fans have had reasons to celebrate that Fortnite was released on mobile along with the Galaxy Note 9. This collaboration brought more attention to the S Pen flagship, and in the process, Fortnite fans got an exclusive in-game skin from Samsung. However, the reality of the situation is that it took a while for Samsung’s flagships to support the highest graphical settings in Fortnite. The Galaxy Note 9 certainly couldn’t do it. But more to the point at hand, none of its flagships support 90Hz/120Hz refresh rate while some other competing Android smartphones do.

It may not be Samsung’s fault entirely, but perhaps the company needs to work more closely with developers to offer the best-possible user experience, especially if said mobile game was used to promote a Galaxy device and vice versa.

Samsung gave up on its own game streaming service

There is a similar sentiment in regards to the whole Galaxy Note 20/Galaxy Tab S7 and Xbox Game Pass Ultimate collaboration as well. Both Samsung and Microsoft have increased their visibility through this partnership but outside of a gift subscription to Microsoft’s game streaming service for select Samsung customers, this collaboration didn’t bring any substantial benefits to Galaxy device users. The Xbox Game Pass Ultimate cloud service was released across the entire Android landscape this week and Galaxy smartphone/tablet users didn’t get early access or any other benefits. This is purely a Microsoft product and not something Samsung has developed.

This lackluster Xbox partnership wouldn’t stick out like a sore thumb if it wasn’t for Samsung’s decision to shut down PlayGalaxy Link earlier this year. It was a streaming platform that leveraged Parsec’s technology to give Galaxy smartphone and tablet users a way to play their PC games remotely on mobile. It wasn’t a subscription to a cloud-based game streaming service, but some would argue that it was a better solution for gamers who wanted to play their existing game library on the go without any strings attached.

We’re not sure if PlayGalaxy Link disappeared because of Microsoft’s Xbox Game Pass Ultimate cloud-based service for mobile, but assuming this is the case then Samsung made the wrong move. Simply put, PlayGalaxy Link and Microsoft’s cloud gaming platform were different enough to coexist. Yet Samsung decided to pull the plug on its own service without much notice or evident reason.

At this point, the Game Launcher is probably the best gaming-oriented service/app Samsung has to offer, but I don’t think Game Launcher and the company’s clever marketing strategies are enough to sincerely-paint ‘Galaxy’ as the brand of choice for gaming enthusiasts.