At the ongoing International Association of Chiefs of Police Conference in Chicago, Samsung officially announced the Galaxy XCover FieldPro rugged phone. The company says it’s a purpose-built field-ready device that is suited for a wide range of enterprise customers, ranging from law-enforcement agencies to field service technicians, transportation professionals, etc.

Unlike other offerings in the Xcover lineup so far, the FieldPro comes with flagship-level internals. These include a 5.1” QHD display, Exynos 9810 SoC (the same chipset used in the Galaxy S9), 4GB RAM, 64GB internal storage, MicroSD slot for expansion, rear-mounted fingerprint reader, and a massive 4,500mAh removable battery (even ships with an extra battery).

In the camera department, it comes with a 12 MP rear shooter with Dual Aperture and an 8 MP front camera. Strangely, it seems to run Android Oreo out of the box but supports an upgrade to Android 10. Overall, the device seems to borrow quite a bit from the Galaxy S9 series on the inside, making it a near-flagship model. 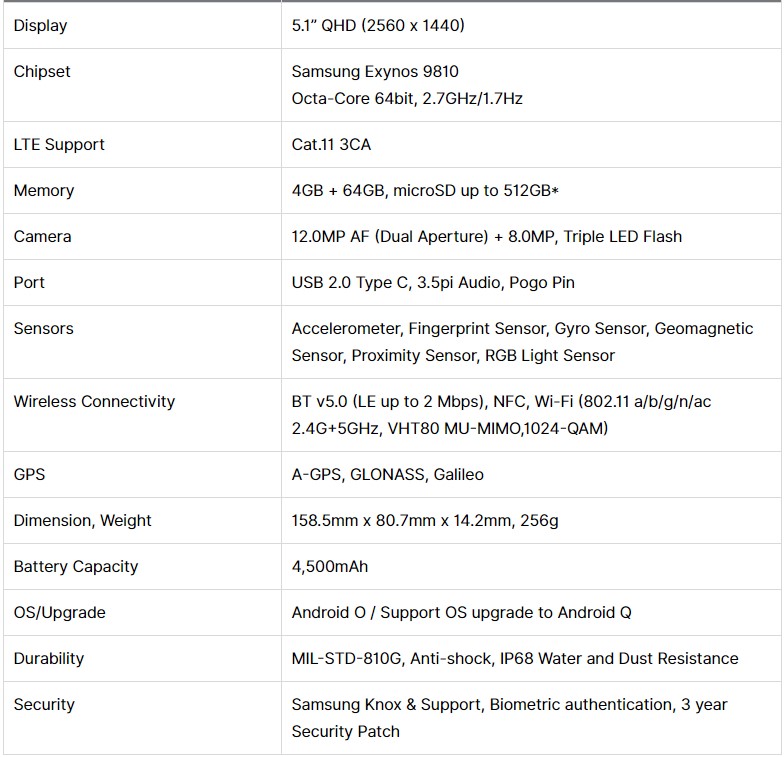 As the Xcover branding suggests, this is a rugged smartphone built to MIL-STD 810G and IP68 standards. This means it can survive drops, shocks, vibrations, extreme temperatures, rain, dust, and water (five feet deep for 30 minutes), making it ideal for field workers operating in harsh conditions. The device also boasts defence-grade security through Samsung Knox to keep the data safe.

“We know from talking to our customers who work in physically demanding environments that durability, reliability, and power are necessities in the products they use,” said Sandra Krief, VP, Carrier Sales and Channel Management, Mobile B2B, Samsung Electronics America. The company hasn’t revealed any pricing or availability information in the press release.