Samsung tops smartphone market in Chile in Q1 2021, thanks to Galaxy A series

Samsung, the world’s biggest smartphone brand, has managed to uphold its number one position in Chile’s smartphone market as well. The company is far ahead of its rivals when it comes to market share. However, the latest numbers reveal that rival Chinese brands are catching up fast, and Samsung needs to be careful.

According to the latest numbers from market research firm Strategy Analytics, Samsung had a whopping 42.1% share of the smartphone market in Chile during Q1 2021. The South Korean firm shipped 1.2 million smartphones during the quarter, achieving a 63% year-over-year growth. It is being reported that Samsung’s impressive market share numbers in Chile are helped by the wildly popular Galaxy A series.

Woody Oh, Director at Strategy Analytics, added, “We estimate Samsung grew its Chile smartphone shipments a healthy 63% YoY from 0.8 million in Q1 2020 to a record 1.2 million during Q1 2021. Samsung’s smartphone market share in Chile remains relatively stable for now, around the 42% level. Samsung has an extensive retail presence in Chile and its midrange A-series models are wildly popular.” Over 2.9 million smartphones were shipped in Chile during the first quarter of this year. 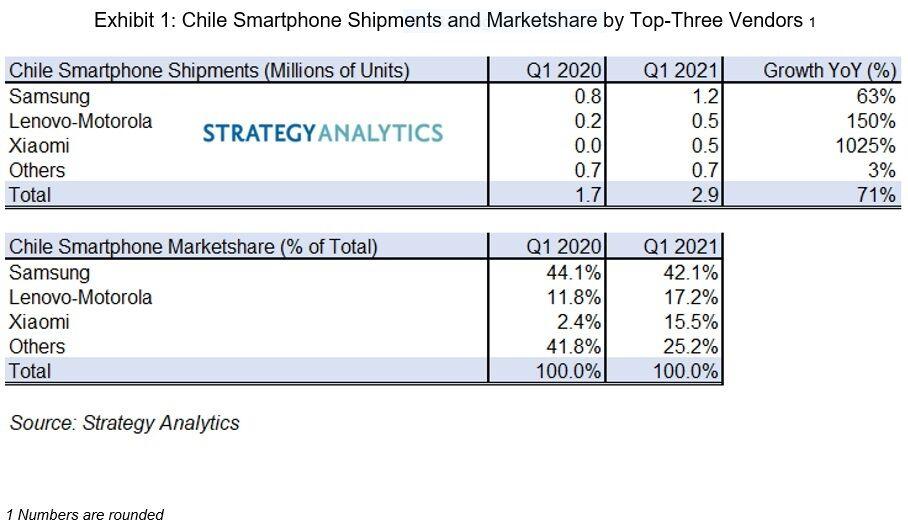