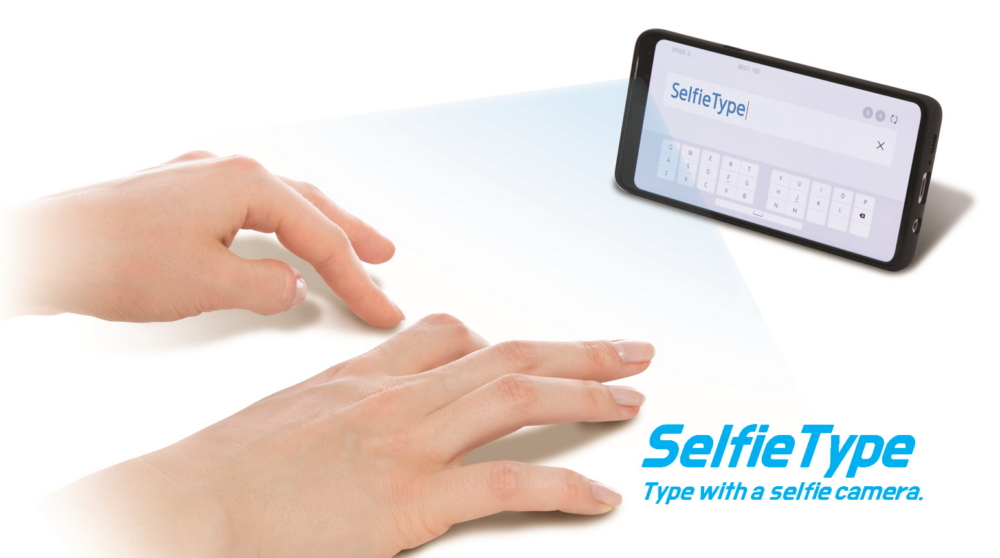 Samsung is going to unveil a new input method for smartphone users later today at CES 2020. It’s called SelfieType and it was created by Samsung’s C-Lab division as a new virtual keyboard powered by AI and image recognition technologies. It could become part of One UI – at least for some Galaxy models – in the future.

On the surface, SelfieType seems to achieve what older projector keyboards did, or tried to accomplish. It doesn’t project any images, but rather, it creates a virtual (invisible) full QWERTY keyboard on a hard surface such as a desk. It uses the smartphone’s or tablet’s front-facing cameras coupled with image recognition technologies to determine what the user is typing in real-time.

What’s very appealing about SelfieType is that it doesn’t require any additional hardware, unlike projector keyboards. It could very well become available on some of the ongoing Galaxy smartphones and tablets through a software update.

It would likely be limited to certain higher-end models that are powerful enough to handle AI-based image recognition on the fly in conjunction with their front-facing cameras. Nevertheless, the entry-level barriers would be nearly non-existent, and that’s definitely a plus for any emerging technologies.

Is this going to be any different than older projector keyboards?

Technically speaking, it is different, but as far as the market perception goes, it’s difficult to tell whether SelfieType will have the same fate as projector keyboards did.

There are reasons to remain skeptical about this technology considering the previous similar attempts to create a virtual keyboard. On the other hand, it’s very important to keep in mind that AI, smartphone cameras, and image recognition technologies have gone a long way over the past few years, so virtual keyboards could now be viable.

SelfieType might work as well as it does in Samsung’s teaser video below. If it does, then it could actually be a great solution for smartphone/tablet users who still find it cumbersome to type on a touchscreen. Especially since it wouldn’t require additional investment.

That’s not to say a smartphone or a tablet coupled with SelfieType will be the next laptop killer, or that this combo will make physical keyboards obsolete. But it will be a welcomed addition if it manages to improve the mobile typing experience even a little bit, especially if it would do so through software updates on existing hardware.

We’ll find out more about SelfieType once Samsung fully unveils it at CES later today, so stay tuned. Until then, what are your thoughts on the possibility that SelfieType could become a One UI feature in the near future? Join us in the comment section below.