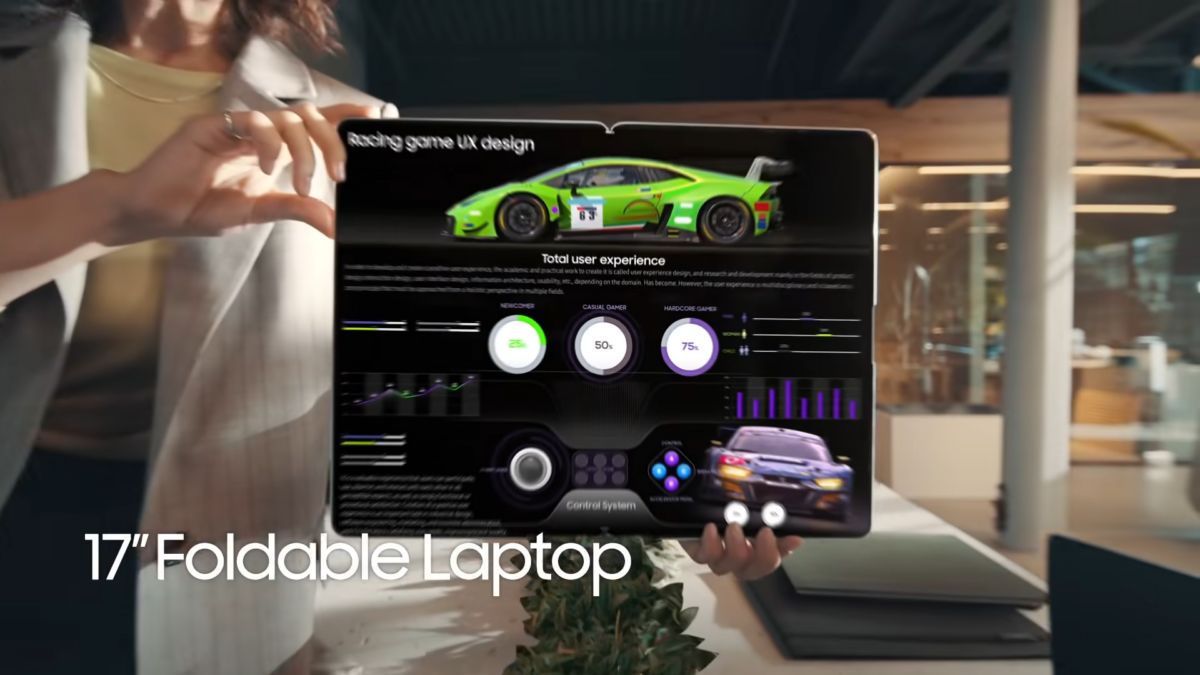 Samsung may have decided to pursue large-screen foldable devices. A variety of foldable device concepts got showcased at SID 2021 earlier this year, and now, word on the street is that Samsung has decided to make at least one of those ambitious concepts a reality. Specifically, Samsung might be developing the 17-inch foldable laptop-tablet hybrid showcased at SID 2021 (check the video below), and rumor has it that the device will be called the Galaxy Book Fold 17.

This bit of information was shared by leaker @UniverseIce on Twitter, but there’s not much else to go by aside from the alleged Galaxy Book Fold 17 moniker. So, the device would have a foldable 17-inch display, and Samsung may want to market it as a foldable laptop with a touchscreen keyboard rather than presenting it as an oversized folding tablet. But judging by Samsung’s previous concept video, the device should be able to fill both roles.

The Galaxy Book Fold 17 could have an Under-Display Camera

It’s too early to be sure of what other features the so-called Galaxy Book Fold 17 will have. The concept showcased earlier this year was quite ambitious. It had very thin bezels all around, and an Under-Display Camera (UDC) — though at that time, the company was referring to it as Under-Panel Camera (UPC).

Evidently, even if Samsung is in the process of developing a 17-inch foldable laptop for the consumable market, a lot can happen from concept to production, so there’s no guarantee that this device — if it exists — has UDC technology, or if it will even look like it did in Samsung Display’s presentation. Nevertheless, Samsung believes that UDC technology is fit for large-screen devices such as the Galaxy Z Fold 3, so it should make just as much sense to add this technology to a larger 17-inch laptop/tablet.

There’s no information about a possible release date, but if the Galaxy Book Fold 17 is real, we’re bound to hear more about it over the coming weeks and months. It would be the company’s first device of its kind, so it’s a pretty big deal.