Samsung has made a decision regarding its involvement with the ToF sensor segment and the company is not throwing in the towel. Earlier this year, it looked as if Samsung abandoned the ToF market segment and left Sony without a competitor, but that’s far from the truth. Samsung is now ready to fight back with a new sensor called the ISOCELL Vizion 33D. No, ’33D’ is not a typo and the sensor isn’t redefining string theory with additional dimensions either. It’s just how Samsung calls its latest ToF sensor in a bid to emphasize its powerful depth-sensing capabilities.

Samsung claims that the ISOCELL Vizion 33D sensor is optimized to provide best-in-class photography and AR/VR experiences as well as 3D scanning and video bokeh effects. The ISOCELL Vizion 33D is apparently capable of tracking moving objects with low latency thanks to a 4-tap demodulation system and 120fps support. The 4-tap demodulation system allows each pixel in the sensor to receive four phase signals simultaneously at 0, 90, 180, and 270 degrees, and this means that the sensor is capable of generating a depth image with just a single shot.

Whether or not the Galaxy S21 series will use the ISOCELL Vision 33D remains unclear, however, the sensor appears to have been created for multiple applications including mobile devices. A low power requirement is essential to a mobile camera sensor, and the ISOCELL Vision 33D has a total power consumption of under 400mW for both IR illumination and the ToF sensor. Meanwhile, the sensor is also capable of assisting the main camera’s autofocus.

Technical specifications include a high resolution (for a ToF sensor) of 640 by 480, 7um pixels, and a distance range of 0.2-5.0 meters. The sensor also uses Deep Trench Isolation (DTI) technology to reduce pixel crosstalk, as well as Backside Scattering Technology (BST) to enhance the sensor’s quantum efficiency. 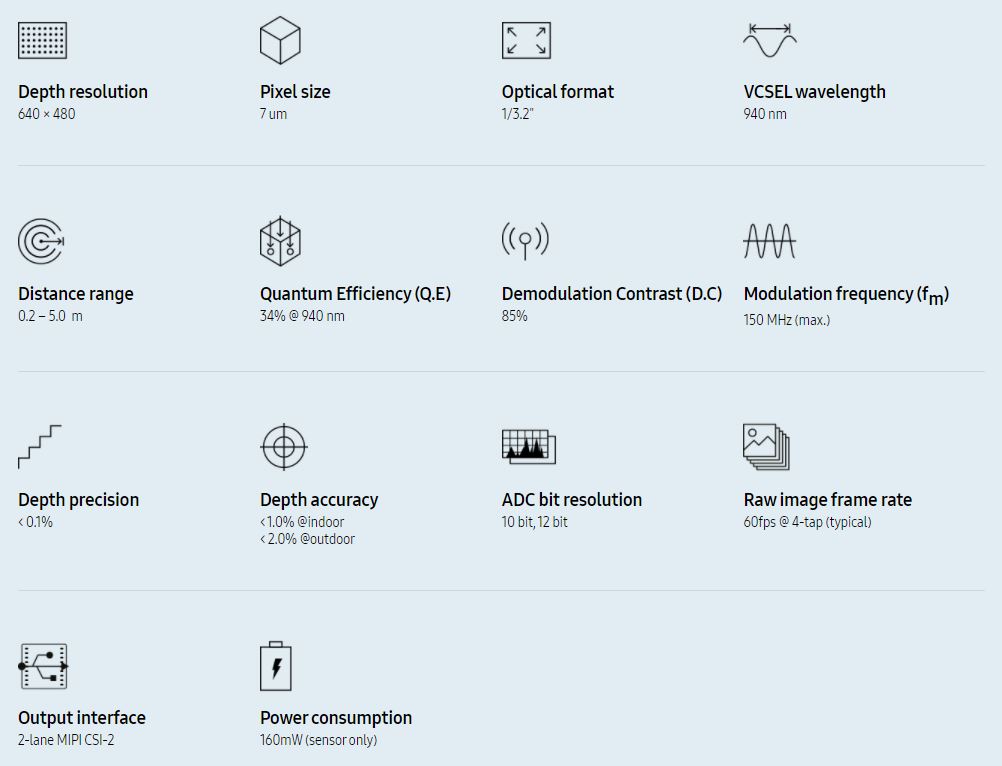