During the Samsung Networks: Redefined virtual event today, the South Korean firm unveiled its new chipsets that enhance the performance and power efficiency of 5G networks. They also help reduce the size of the company’s next-generation 5G RAN (Radio Access Network) solutions. All the new chips are compliant with 3GPP’s Release 16 standards.

The company’s first-generation 5G RFIC chip was released in 2017 and was used to power the world’s first home broadband service. The second-generation 5G RFIC was launched in 2019, and it was utilized to power the industry’s first mmWave 5G NR radio. The third-generation RFIC, which was unveiled today, supports 28GHz and 39GHz spectrums, and it will be used in the company’s new 5G Compact Macro. It reduces the antenna size by 50% and improves power efficiency. It also features double the output power.

The DFE-RFIC, which converts digital signals into analog and vice versa, is an essential component used in 5G radios. It supports 28GHz and 39GHz spectrums. Sub-6GHz and mmWave spectrums are supported as well. The chip increases the output power and reduces the size of Samsung’s next-generation 5G network solutions.

Junehee Lee, Executive VP and Head of R&D, Samsung Networks, said, “This newly unveiled chipset is the fundamental component of our state-of-art 5G solutions, developed through a long-standing R&D effort that enables Samsung to be at the forefront of delivering cutting-edge 5G technologies. As one of the largest semiconductor companies in the world, we are committed to developing the most innovative chips for the next phase of 5G advancement, integrated with the features mobile operators seek to stay competitive.” 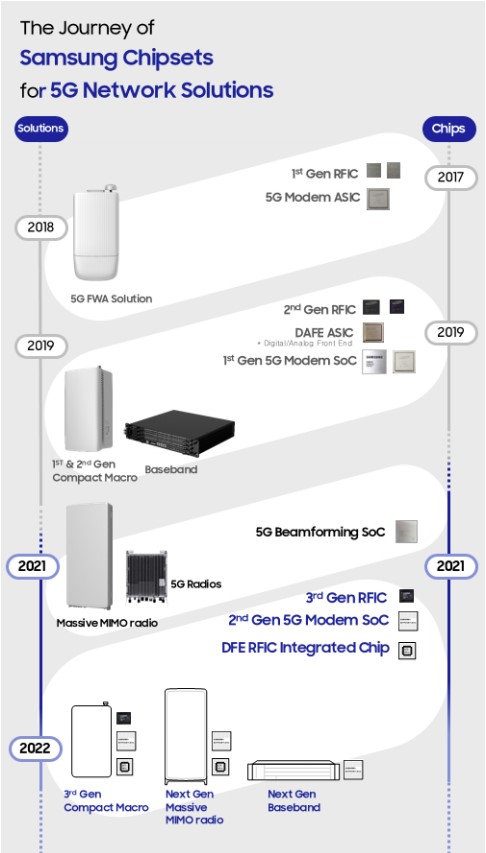