Predictive back gesture coming to Galaxy devices with Android 14 update 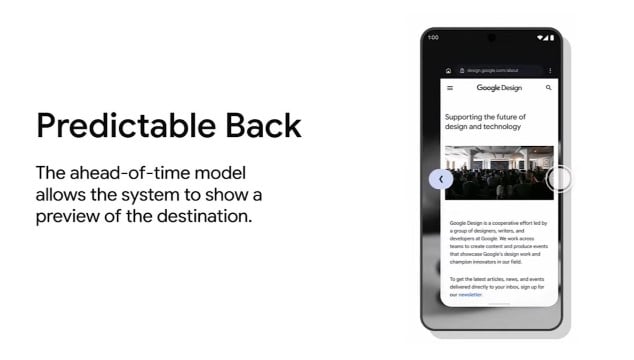 With Android 13, Google began working on a feature called ‘Predictive Back Gesture,’ which gives a preview of the destination or other result of the back gesture before fully completing it. Finally, Google has revealed that Predictive Back Gesture will be a default feature in Android 14 and will also work within applications.

Going back to the previous screen using the back gesture on Android devices is excellent. All you need to do is perform a swipe gesture on the screen. However, this could often take you out of the app by mistake. Having a preview of the previous screen before performing the back gesture could be pretty helpful here, and that’s what Predictive Back Gesture brings. It will come to Samsung’s Galaxy smartphones and tablets with the Android 14-based One UI 6.0 update.

In Android 14, when the back gesture is performed from the left or right edge of the screen, the page of the app you are viewing will shrink and reveal what page will appear if you complete the back gesture. Thus, preventing users from accidentally exiting the app in the middle of a task. Users can already test this predictive back gesture feature on Android 13 on apps like the Google Phone and Google TV. These supported apps show you exactly where you will land if you perform the back gesture. However, you need to first enable the feature from the Developer options.

You can navigate to Settings > About phone > tap “Build number” seven times. Under Developer options, search for “Predictive back animations” and toggle it on. Now, when you perform a back gesture in the Google TV or Google Phone app, the app will shrink, displaying the home screen in the background. Folks at 9To5Google also spotted this feature working with the Google Calendar app.

Google is encouraging developers to make better-behaving apps for foldables

Most smartphone buyers buy a phone to take advantage of these phones’ great camera capabilities. For example, the Galaxy S22 Ultra saw a huge demand among smartphone buyers because of its exceptional camera performance. And cameras are going to be one of the top reasons for a consumer to purchase a phone. App developers, in […]

Similar to Samsung’s Quick Share, Google’s Nearby Share feature allows you to send files between two Android devices. It creates a peer-to-peer Wi-Fi network using Bluetooth pairing to facilitate file transfer between them, and it even works offline. While the feature is nice, the Material You makeover is all set to arrive for Nearby Share […]

In an official blog, Google announced that it will begin deploying the Privacy Sandbox system to a select number of Android 13 devices starting in early 2023. The Privacy Sandbox is a set of technology developed by Google aimed at creating a web standard for websites to access user information without compromising their privacy. Google […]