Get 4 months of YouTube Premium free with the Galaxy S10 With Spotify expanding its partnership with Samsung to have the app pre-installed on the Galaxy S10 and other new devices, Google is coming out with a promotion of its own. Google is offering Galaxy S10e, Galaxy S10 and Galaxy S10+ owners four months of YouTube Premium for free. It costs $11.99 per month.

It’s a paid tier of the streaming service which provides ad-free videos, background playback, offline downloads and more. It also includes access to the music streaming service YouTube Music which is obviously competing against the incumbent Spotify.

Spotify’s latest promotion offers Galaxy S10 owners six months of the Premium tier for free. However, it’s only limited to users in the United States. The YouTube Premium promotion is available to Galaxy S10 owners in more than two dozen countries. With YouTube Music, subscribers get access to millions of official songs, live performances, music videos, and more ad-free, offline and in the background when they’re on Premium.

Google also points out that YouTube videos and the platform’s original content will look even better on the Galaxy S10. That’s because they have the world’s first HDR10+ certified Dynamic AMOLED display. All videos are ad-free when subscribed to this tier. With background play, a video will continue to play even if the app is minimized or the screen is turned off. Offline video downloads allow users to save content for viewing when they’re without an internet connection.

This promotion is available only to those who are not currently subscribed to YouTube Premium, YouTube Music Premium or Google Play Music, have not been a subscriber before and have not even participated in a free trial before. Once the trial period ends, they will be automatically charged the standard subscription price. That’s unless the subscription is canceled before the trial is up. This offer can be redeemed by March 31, 2020.

YouTube Premium will also be available free for four months to Galaxy Fold and Galaxy Tab S5e owners when these devices go on sale. Google is also offering a similar promotion to all other Samsung Galaxy device owners. Simply activate a device between February 20, 2019 and February 29, 2020 and get YouTube Premium free for two months. The list of supported countries for both offers is available on Google’s blog. 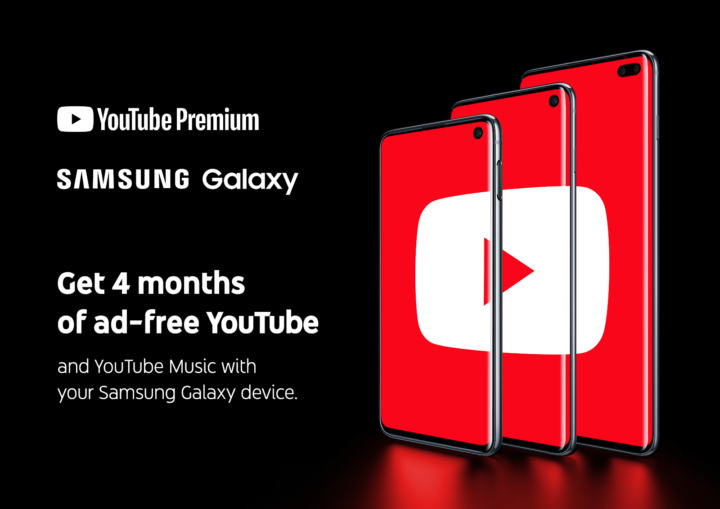 YouTube has been ramping up the number of ads on its platform as a means of maintaining the platform and supporting creators financially. While ads may be pretty annoying, YouTube has no intention of lowering the numbers. You can see more than five ads on your Samsung device. In fact, several users have reported seeing as many […]