It was first reported late last year that Samsung might introduce a 4K OLED laptop display at CES 2019. No announcement was made in Las Vegas but the wait is finally over. Samsung Display today announced that it has succeeded in making the world’s first 15.6-inch UHD OLED panel for laptops. It will be supplying this panel to leading manufacturers for their premium notebooks.

The Korean conglomerate’s display business is no stranger to OLED panels. It has effectively cornered the market on mobile OLED displays. It’s now expanding into the notebook market. Samsung Display has nine production facilities worldwide and is a specialist manufacturer of high-quality displays.

The OLED display technology offers several benefits over LCD and will indeed be a great fit for premium laptops. Samsung points out that this panel meets the VESA’s DisplayHDR True Black specification, has extreme color accuracy and full HDR compatibility.

Samsung’s 4K OLED laptop display panel has a brightness level ranging from 0.0005 to 600 nits and a dynamic contrast ratio of 120,000:1. When compared to LCDs, the blacks appear 200 times darker and whites twice as bright.

The spectrum of 3.4 million colors is double that of similarly sized LCD panels and they meet the DCI-P3 standard that’s best suited for video streaming. Samsung says that the panel has a 1.7 times higher color volume when compared to LCDs of the same size. This improves clarity when viewing the display outside.

Samsung hasn’t said which manufacturers will be the first to use its 15.6-inch 4K OLED laptop display in their products. We can expect it to land on the premium models from the likes of Lenovo and Dell. Samsung says that it will start mass producing the panel by mid-February. So it’s going to take a couple of months before products with this panel arrive. Samsung may also use the panel in one of its own premium notebooks. 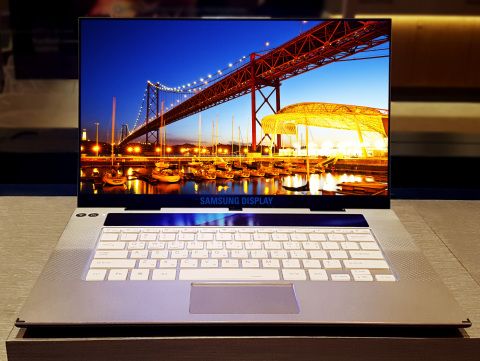 The Galaxy Book is a 12 inch 2K AMOLED display.
Is that difficult to turn that into a 15 inch 4K OLED display?

This laptop is ugly.
I know it is only for demo purposes.