A new leak showing a protective film for the Galaxy S10 Lite has surfaced online. It’s not too different from what we’ve been seeing and hearing about the S10 Lite before. The device will presumably come with a flat Infinity-O display and the latest leak reiterates the same. But then, screen protectors or films don’t always tell what a smartphone will look like.

Samsung will reportedly be offering as many as four variants of the Galaxy S10. We’ve already seen renders for the Galaxy S10 and S10+. While the regular S10 render featured a triple rear camera setup, the S10+ render showed off four cameras at the back and two at the front. Samsung also has an S10 model with six cameras in total and 5G support.

Now the protective film leak for the S10 Lite reveals a flat Infinity-O display. This particular model will have a single front camera. Zoom-in on the image below and you’ll see a circular cut-out for the front camera on the top left corner.

Interestingly, the S10 Lite protective film leak shows symmetrical bezels on all the four sides. It’s something different from the previews ones which showed slightly wider top and bottom bezels. The bezels look really slim and if the end product does look like this, the Galaxy S10 will wow many.

Samsung has already launched its first smartphone with an Infinity-O display. It unveiled the Galaxy A8s in China yesterday. It’s the first device from Samsung with a hole punched in the LCD display for the front camera. The Galaxy S10 would obviously not have an LCD display but the camera cutout may look a lot similar. 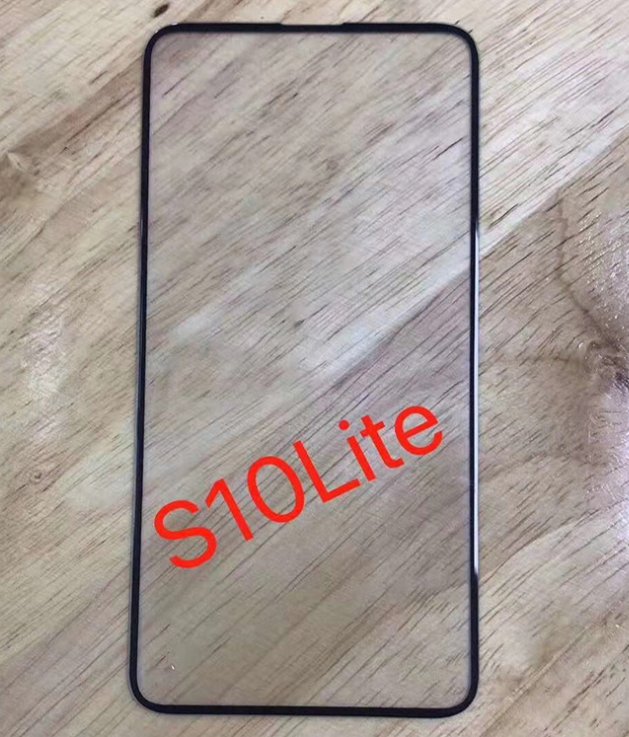