Galaxy S10 display could double as the earpiece

We have already detailed that Samsung doesn’t stand to gain much by opting for a display notch for its flagship smartphones so the company will need to think outside the box in order to increase the screen-to-body ratio of its next flagship smartphone. A new report out of South Korea claims that Samsung is ready to commercialize a new technology which will enable the display to double as the earpiece. There’s some hope that it might introduce this technology with the Galaxy S10 next year.

Samsung made its mark in the bezel-less smartphone territory with the Galaxy S8 and Galaxy S8+ before improving on that formula with this year’s flagship handsets. However, to achieve a more edge-to-edge look for the top and bottom as well, the company will have to make some adjustments. Some OEMs have taken the easy way out by piling in all of the essential components like the earpiece and front camera into a notch while pushing the panel to the top edge. Samsung isn’t expected to do that but it may make some more space at the top by eliminating the earpiece.

Samsung has already demonstrated this technology

The report claims that Samsung is ready to commercialize its sound-emitting OLED technology next year and that the first product will likely be a 6.2-inch panel which is expected to be the size of the Galaxy S10’s display. The panel will basically use vibration and bone conduction to transmit sound in the 100 ~ 8000Hz range. Since the vibrations will be very fine it will only be possible to hear the sound when the ear is pressed to the top half of the screen that you can see highlighted in the image below.

It’s not one of those vague reports as well given that Samsung actually demonstrated this “Sound integrated into display” technology at the Society of Information Displays conference last month. Moreover, the technology is already being used for smartphones. Chinese manufacturer Vivo today launched a new smartphone which also uses similar technology and touts a screen-to-body ratio of over 92 percent.

The Galaxy S10 display may not be completely edge-to-edge as Samsung will have to put the iris scanner and front camera somewhere. The rumored 3D sensing camera will require space as well so there may be a bezel at the top but removing the earpiece will allow the company to stretch the display a bit more at the top.

Whether or not this actually happens remains to be seen, though. What do you think, should Samsung introduce this technology with the Galaxy S10? 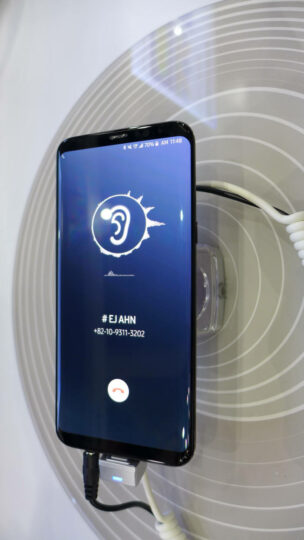