Samsung shows off its latest flexible and rollable OLED displays

Samsung is showcasing its OLED technological dominance at the SID DisplayWeek by showing off its latest flexible and rollable OLED displays. A big part of the company’s booth at the trade event is dedicated to its automotive OLED technologies which feature a variety of flexible and rollable OLED displays. The products on display include flexible, transparent, rollable and a lightfield display.

A new range of flexible and rollable OLED displays

Perhaps the most impressive installation at Samsung’s booth was its 14-inch 960×540 rollable OLED panel that has a bending radius of 10R. The impression Samsung seems to be giving off here is that it’s mulling commercializing rollable OLED displays in the not too distant future.

The company also demonstrated its 4.94-inch 360×112 transparent AMOLED panel with a transparency of 44 percent and a 7-inch 1280×800 lightfield display with support for 18 view points through Samsung Display’s binocular disparity vergence motion parallax technology.

For potential automotive customers, Samsung is showcasing its “unbreakable” 6.22-inch 1440×2960 display with an all-plastic design that promises additional durability for an automotive environment.

Samsung also revealed an OLED display that doubles as a speaker for the first time. The technology is similar to LG’s crystal-sound OLEDs. Samsung calls the 6.22-inch 1440×2960 panel its “Sound on display” prototype which was configured as a telephony receiver. That wasn’t the only unorthodox product Samsung Display has at its booth. There’s also one with a force sensor that can work underwater and Samsung is calling it the “Aqua-force” OLED panel. The prototype was a 5.77-inch 1440×2960 panel that can work underwater.

We’ve already reported that Samsung showcased a new 1200 ppi AMOLED display for virtual reality yesterday. It lines up with recent reports that Samsung may be working on a standalone Gear VR headset. 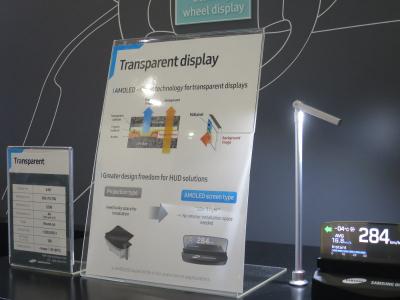 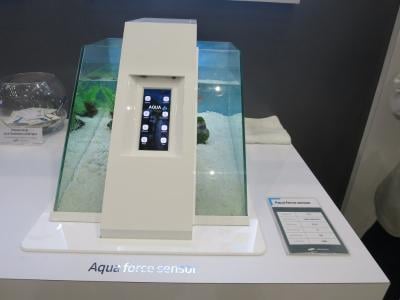