Samsung started updating its devices to the Android 8.0 Oreo in February, beginning with the Galaxy S8 and S8+. Since then, the company has pushed out the Oreo update to the Galaxy Note 8, Galaxy S7/S7 Edge, Galaxy A7 (2017), Galaxy A5 (2017), etc. However, the newer Galaxy A8 and A8+ which were launched earlier this year haven’t received the Android Oreo update so far.

It looks the situation is all set to change soon as Samsung is gearing up to roll out the Android Oreo update to the Galaxy A8 and A8+. The company has received WiFi certification for these devices with Android 8.0 onboard, hinting that the rollout is around the corner. Certification is one of the few final steps before the release of a new update, so this is a good indication that these handsets will get Oreo sooner rather than later.

Samsung is yet to reveal a roadmap for releasing the said update for the 2018 Galaxy A8 and A8+. It should only be a matter of time now, though, as the company will be updating other mid-range handsets in the coming months and it would almost certainly update the newer and pricier Galaxy A8/A8+ to Oreo before moving further down its smartphone lineup. 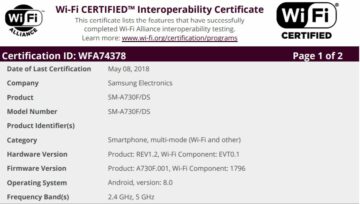 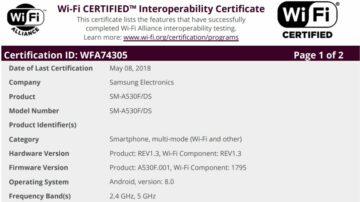