Galaxy A7 (2017) Oreo update is rolling out in Vietnam

The Galaxy A3 (2017) and Galaxy A5 (2017) have been receiving the Android 8.0 Oreo update in Russia for a few days now, and it looks like the Galaxy A7 (2017) is joining the Oreo party today, only this time the update has been released in Vietnam. One of our readers has sent us screenshots of the Oreo update from the A7 (2017); the build number is getting a jump to A720FXXU3CRD3, and the update includes the April 2018 security patch.

With the Galaxy A7 (2017) Oreo update rolling out, all three 2017 Galaxy A series models are now making the transition to the latest version of Android. However, as we had said earlier, the update is likely to take a few weeks to reach countries other than the one where it debuted for each device. The way Samsung works – leaving each of its regional arms to do things of their own accord – makes it impossible to say when an update will arrive for a particular region, and we’re even seeing the A7 (2017) getting the April security update in a few markets this week without Oreo, which should give you an idea of how things will proceed for many (if not most) countries. 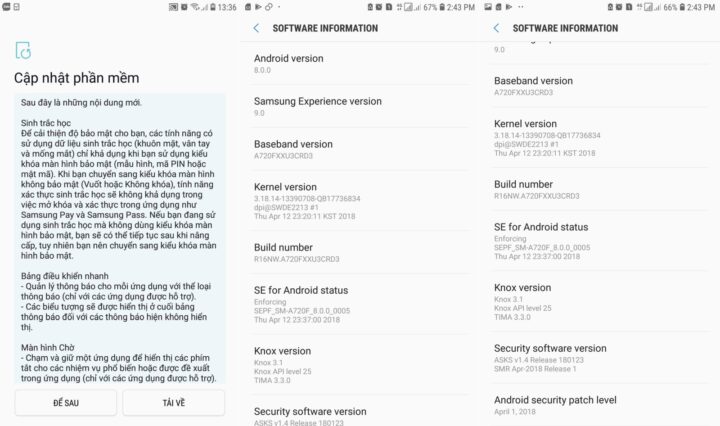 You can, however, keep checking if Oreo is available for your Galaxy A series device by tapping the Download updates manually option in the Settings » Software update menu. The Galaxy A7 (2017) Oreo update is 1.3GB in size, so it’s recommended to use a Wi-Fi for the download unless you have lots of data bandwidth available on your mobile data plan. For details on everything Android 8.0 Oreo brings to the table, check out our extensive coverage, but keep in mind that you may not get all of the new features and functionality that are included in the Oreo update for Samsung’s flagship devices.