[Update: Sprint and T-Mobile, too] Galaxy Note 8 now shipping to customers in the United States

The much-anticipated Galaxy Note 8 has now started shipping to customers who pre-ordered a unit in the United States, according to several reports on reddit. The handset is expected to arrive as soon as September 5, throwing the September 15 launch date out of the window.

I’m not entirely sold, though. Earlier this year, I received an alert informing me that my Galaxy S8 had been dispatched ahead of time, only to later find out it hadn’t; Samsung had merely filed a consignment notice with its delivery partner, which prematurely sent out shipping alerts.

The moral of the story? Don’t get your hopes up. Even if the notification turns out to be a mistake (we’re hoping it isn’t), the Galaxy Note 8 is scheduled to start shipping in the region in a little more than a week—so you won’t need to wait too much longer to get your hands on it.

Update: It appears that Sprint and T-Mobile have also started sending out shipments. 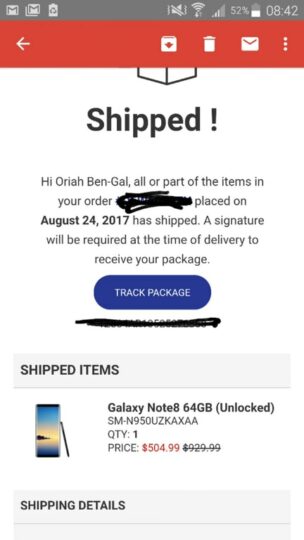