Samsung Galaxy A9 Pro review: Insane battery life makes this one a winner

We liked the Galaxy A9. The 6-inch phablet’s claim to fame was its enormous 4,000 mAh battery, and it was also the most feature-packed smartphone in the Galaxy A lineup. A few months later, Samsung came out with the Galaxy A9 Pro for the Chinese market. The A9 Pro became the first mid-range Samsung device to feature 4GB of RAM, and the company also made the phone every so slightly thicker to upgrade the 4,000 mAh cell in the regular A9 to a 5,000 mAh unit. That’s the biggest battery we have ever seen on a Galaxy smartphone, and it’s Samsung’s answer to the slew of Chinese smartphones that have been launching in recent times with large batteries.

The Galaxy A9 Pro also gets a rear camera upgrade to a 16-megapixel sensor (the regular A9 has a 13 MP primary camera) and comes with Android 6.0 Marshmallow out of the box. We managed to get our hands on a review unit following the A9 Pro’s recent launch in India, and I’ve been using it as my primary device for more than a week. We’ve already reviewed the Galaxy A9, and since the Pro retains most of the features of its non-Pro sibling, our review of the A9 Pro will be mainly about what’s different. In short, it will be a quick read, but you will hopefully be able to make a decision on whether the A9 Pro is worth your money by the end of it.

Bigger battery that goes on and on… and on

With a 5,000 mAh battery, you really can’t go wrong no matter how powerful a smartphone might be. The Galaxy A9 could last really long on a single charge, and the A9 Pro only makes things better. Following the first full charge, I only managed around 4 hours of screen time and around a day of total usage from the phone. It was disconcerting even though I knew the phone had only been charged once, but with every subsequent charge, battery life kept on improving.

Post a few charge and discharge cycles, battery life on regular usage has been stellar. The last time I checked, I managed a day and 19 hours of total usage time, with a screen time of over 8 hours. This included around 10 minutes of playing Modern Combat 5 and around three hours of exclusive usage on an LTE connection (with two SIMs active on the device). The screen on time keeps varying, but the phone manages to last over a day and a half in total on every charge, a consistency you won’t find on any Samsung device except the US-exclusive Active series. Screen on times also reach the 7 hour mark at the least, unless I do a lot of stuff on LTE instead of Wi-Fi. 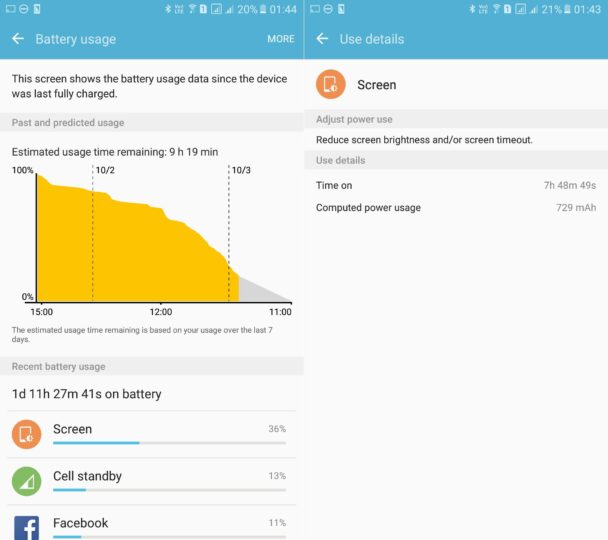 Extremely low idle drain is unsurprisingly the main reason the Galaxy A9 Pro lasts so long – you can go to sleep with only 15 percent left and wake up the next morning to do your morning round of email and social media checking before reaching for the charger. Even exclusively on an LTE connection at idle overnight, the phone only lost 3 percent of its charge. Those power saving modes Samsung offers on every device? You can expect never to use those on the A9 Pro, that’s how good the phone is when it comes to battery life. The best part is that the 5,000 mAh battery doesn’t take up any noticeable space, as the A9 Pro isn’t notably heavier or bigger than any other 6-inch smartphone in the market.

Charging times on the A9 Pro are a little too long despite the fast charging support. You can expect at least two hours on the charger to see the battery go from 0 to 100, but of course, the good part is that you don’t really have to fully charge the phone to be able to use it without fear of running out of power. There’s one small niggle – the A9 Pro refused to charge fast with my third-party Tronsmart fast chargers, so I had to use Samsung’s official chargers at work and home. It’s possible Samsung has added the limitation for safety issues, but it does mean you will need to keep the official charger handy to use fast charging.

Here are a couple of screenshots of how the phone fared on different days. The last screenshot shows more than a day and a half of total usage on an LTE connection, without a single moment of usage on Wi-Fi. 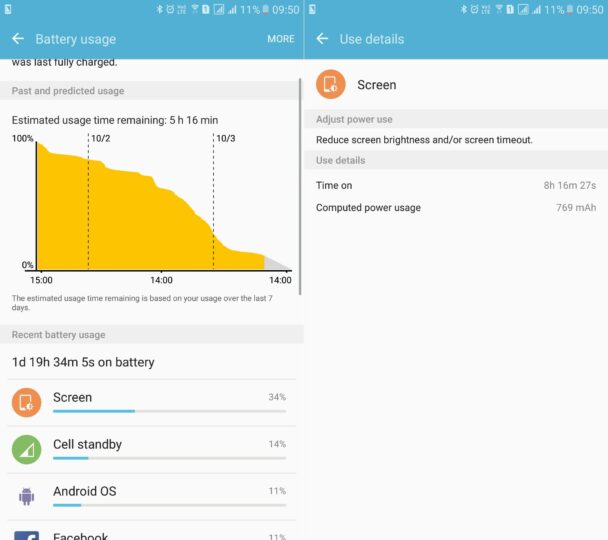 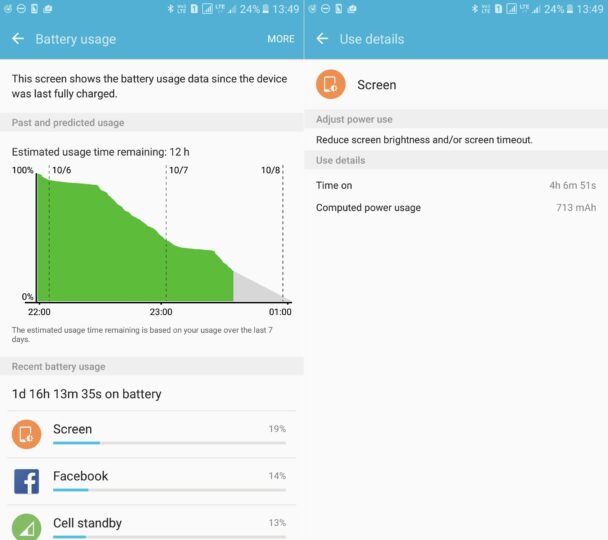 The Galaxy A9 was already an impressive performer thanks to the Snapdragon 652 SoC and 3GB of RAM, and the 4GB of RAM on the Galaxy A9 Pro helps the device keep more apps in memory and keep performance more consistent when you’re quickly jumping in and out of apps. To test things out, I started playing a game, sent it to the background, then went on using other apps for a little while. I wasn’t hopeful of the game resuming where I had left it, but that’s exactly what happened even though the game was at the eighth position up in the multitasking list. I haven’t run into any notable stutters during regular usage either, and like the A9, the A9 Pro runs even the most high-end gaming titles (like Modern Combat 5) without issues.

Android 6.0 Marshmallow out of the box

The Galaxy A9 Pro comes with Android 6.0 Marshmallow out of the box, with most of the features you have seen on other recent Samsung devices. There’s full support for themes, Multi Window, gestures for muting, screenshot capture and more, and features like S Bike Mode and Ultra Data Saving Mode for the Indian variant of the device. Everything runs well and without issues, although Samsung is yet to release the September security patch for the device. Android 7.0 Nougat is sure to make its way to the A9 Pro in the future, something that might not be guaranteed for the Galaxy A9 since it came with Android 5.0 Marshmallow out of the box.

The Galaxy A9’s camera performance was the only thing we didn’t like, and I’m afraid the bump in camera resolution hasn’t done much on the A9 Pro. The worst part about the camera is how soft photos come out. You would expect a 16-megapixel camera to capture a high amount of detail, but Samsung has some sort of post-processing going on that results in soft images even on a sunny day. This post processing doesn’t affect the center of focus, but everything outside the main area of focus has this over-exposed, softened look that is easily noticeable.

The images captured by the A9 Pro aren’t exactly bad, but even a slight amount of zooming in on a photo can reveal the aforementioned problems. Indoors and in low-light conditions the details deteriorate considerably, although optical image stabilization means camera shake isn’t an issue. The 8-megapixel selfie camera on the front remains unchanged from the A9, and it also suffers from softening and washed out colors. Overall, it certainly looks like Samsung is limiting the camera potential on its non-flagship phones on purpose, which doesn’t bode well when you have competing flagships like the OnePlus 3 available for lower prices yet impressive cameras. 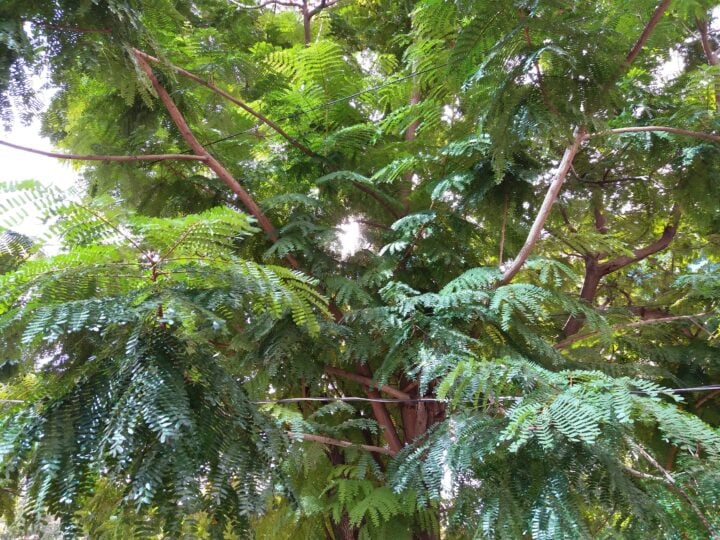 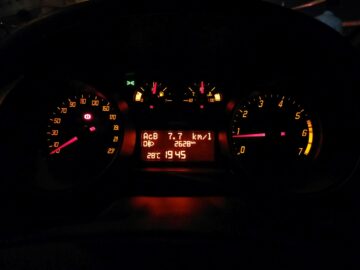 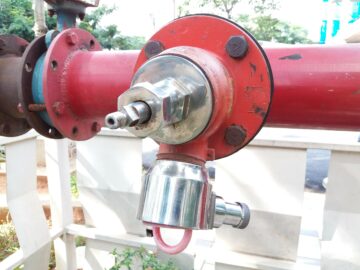 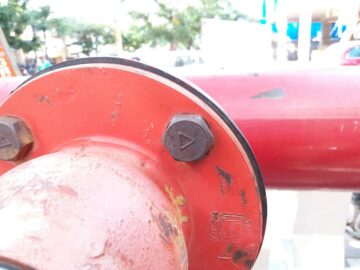 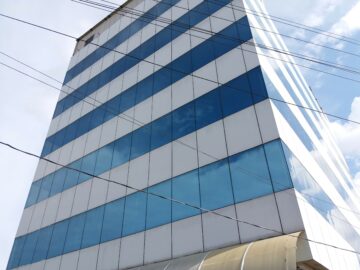 With the Galaxy A9 Pro, Samsung took what was one of its best mid-range smartphones and threw in a couple of upgrades to make the package even more compelling. The 5,000 mAh battery simply refuses to die. It doesn’t matter if you’re on a Wi-Fi or LTE connection – the A9 Pro is guaranteed to last you at least a full day and still have enough juice to left to get to the next morning before needing a charge, and that’s with heavy usage. The additional gig of RAM allows more apps to stay in memory at a time, and all these upgrades come with just a slight increase in the device’s thickness.

But at the same time, some of the limitations of the regular A9 have carried over as well. There is no notification light, another feature – in addition to good cameras – that Samsung is keeping for its flagships. But those are pretty much the only problems with an otherwise excellent mid-range smartphone. Of course, the 6-inch display will be too big for some and the high price tag (around $480) will turn others away. But at the end of the day, the Galaxy A9 Pro has a lot going for it, and it’s a shame Samsung is limiting its availability to Asian markets.

Don’t forget to check out our review of the Galaxy A9 for details on the cameras, design, audio quality, and display, which have carried over to the A9 without any changes. We have added all the pros and cons of the regular A9 in the list below, just in case you don’t want to read the entire review.