A senior official from Samsung was recently arrested by the South Korean police officers while trying to steal the company’s confidential information related to 14nm and 10nm technology. The report contained information that Samsung is planning to use a 10nm Exynos chipset in the Galaxy S8 next year. Now, we’ve come across more details regarding the next high-end Exynos chipset from Samsung.

According to the information we’ve received, the Galaxy S8 could use an Exynos 8895 processor with ARM’s new Mali-G71 GPU. The new GPU is said to be up to 1.8 times as powerful as the Mali-T880 MP12 GPU used in the Exynos 8890-powered Galaxy S7. Moreover, this GPU is reportedly faster than the one from the Snapdragon 830 according to GFXBench results.

The Mali-G71 GPU uses ARM’s brand new Bifrost architecture, which is claimed to offer high-end 4K and VR experiences. It is also compatible with Vulkan, OpenGL ES 3.2, GPU Compute, and Android RenderScript APIs. Running at 850MHz, the 16nm GPU can provide a throughput of 27.2Gpix/s, which is double than that of the Mali-T880 GPU running at the same frequency. However, it needs to be seen what frequency Samsung ends up using.

It is being rumoured that Samsung might use a 4K display in the Galaxy S8 and Galaxy S8 edge for a better VR experience. You should take this with a pinch of salt as it is preliminary information, and things can change by the time Samsung unveils the Galaxy S8 early next year. 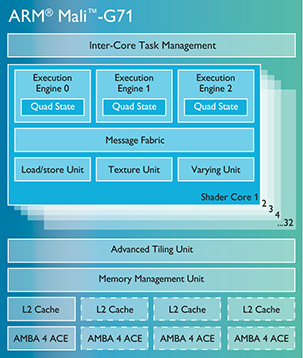