We have known for a couple of months now that Samsung is developing a new high-end flip phone codenamed “Veyron.” It’s going to be the successor of the SM-2016 high-end clamshell phone that was released in China last year. The SM-W2017 was spotted on Geekbench a couple of days ago and that revealed some specifications of the handset. It has now made a stop at AnTuTu benchmark where more specs have been revealed.

Aside from its 4.2-inch 1920 x 1080 pixel resolution display, the AnTuTu benchmark result shows that it’s powered by the Qualcomm Snapdragon 820 processor coupled with 4GB RAM and 64GB of internal storage. It also features a 12-megapixel rear and 5-megapixel front camera. It could be the same camera setup you find in the Galaxy S7 and the Galaxy Note 7. The handset will be powered by Android 6.0.1 Marshmallow. These specs make it clear that the SM-W2017 is certainly going to be a flagship in its own right but given that there’s isn’t a big enough market for flip phones outside of China, it will most likely be exclusive to the People’s Republic. 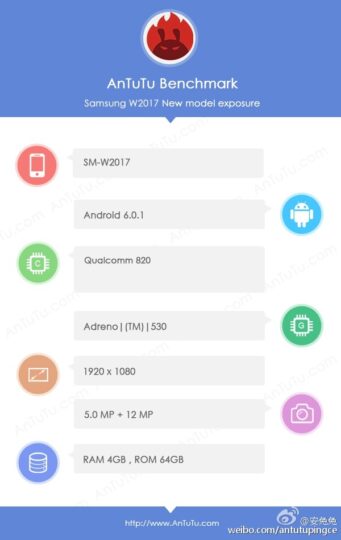