We exclusively reported a few months ago that Samsung is working on a new high-end clamshell smartphone for China codenamed “Veyron.” It released the SM-W2016 in China last year, it’s a high-end flip phone and this handset’s successor is now in the pipeline. The SM-W2017 has been spotted on Geekbench with a Qualcomm Snapdragon 820 processor and 4GB of RAM.

It was initially believed that the SM-W2017 will feature dual 3.9-inch HD Super AMOLED displays and an Exynos 8890 processor. However, an import listing for this handset was recently spotted and it listing the screen size as 4.2-inch. The handset tested on Geekbench was running a Qualcomm Snapdragon 820 processor coupled with 4GB of RAM and running Android 6.0.1. Those specs are enough to push the handset in bonafide flagship territory. Actual images of the handset itself have not yet emerged but it may only be a matter of time before we get our first look at the SM-W2017. 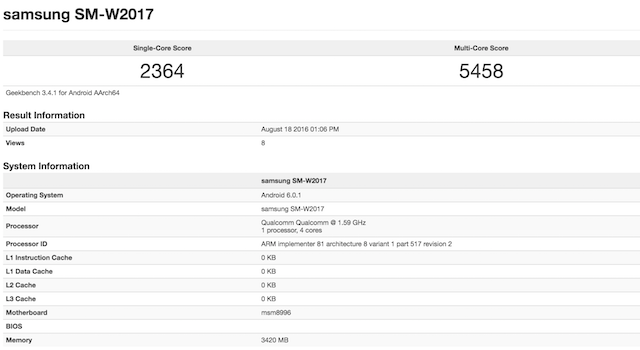