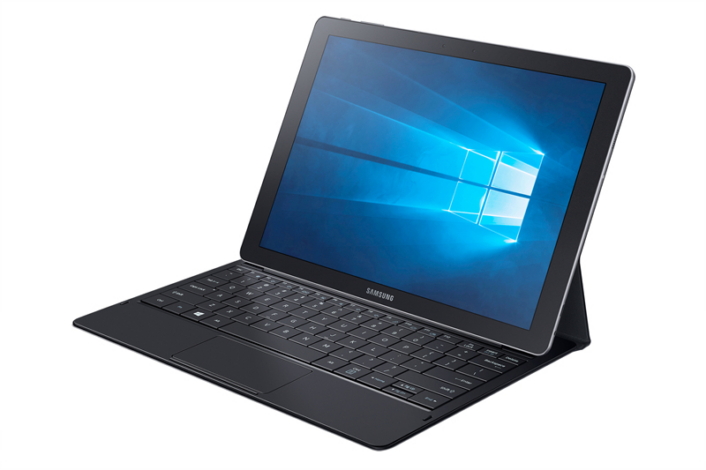 The Galaxy TabPro S, which leaked earlier today, has been officially unveiled by Samsung at CES 2016. The TabPro S is similar to Microsoft’s Surface lineup of tablet-cum-laptops and runs a full version of Windows 10 with a 6th Gen. Intel Core M processor under the hood.

Like the Surface, the TabPro S comes with a keyboard accessory that can be connected to the tablet to turn into a laptop, with the ability to use the keyboard in both landscape and portrait orientation of the display. The display itself is a 12-inch Super AMOLED unit – it’s the first Windows 10 tablet with a Super AMOLED display, and the tablet is also the first with LTE Cat 6 support to run Microsoft’s latest desktop operating system.

The display resolution is 2160×1440 pixels, putting it right in the “Retina” category (and making it a good competitor for the MacBook 11 or even the 13-inch MacBook Air, even though those are full laptops instead of tablet and laptop hybrids). The processor is a dual-core chip clocked at 2.2GHz, and the TabPro S comes with 4GB of RAM and a 128GB/256 GB SSD. Two 5-megapixel cameras handle imaging on the front and back.

The TabPro S has a 5,200 mAh battery inside, and Samsung says the 2-in-1 tablet can offer up to 10.5 hours of battery life. Connectivity options include Wi-Fi, GPS, NFC and Bluetooth 4.1 – a separate adapter will be sold for adding HDMI, USB Type C, and a regular USB port, in addition to a Bluetooth-enabled stylus. All of the hardware is packed inside a body that weighs 693 grams (696 g on the LTE variant). The tablet is extremely thin as well, with only 6.3 mm thickness.

The Galaxy TabPro S is an interesting device – not just for the fact that it is called Galaxy but doesn’t run Android. Traits like the Super AMOLED display, fast connectivity and Windows 10 make it a nice tablet and laptop hybrid that could do well provided it is priced right. Samsung isn’t saying anything about pricing yet, but the TabPro S will be available globally starting February 2016. 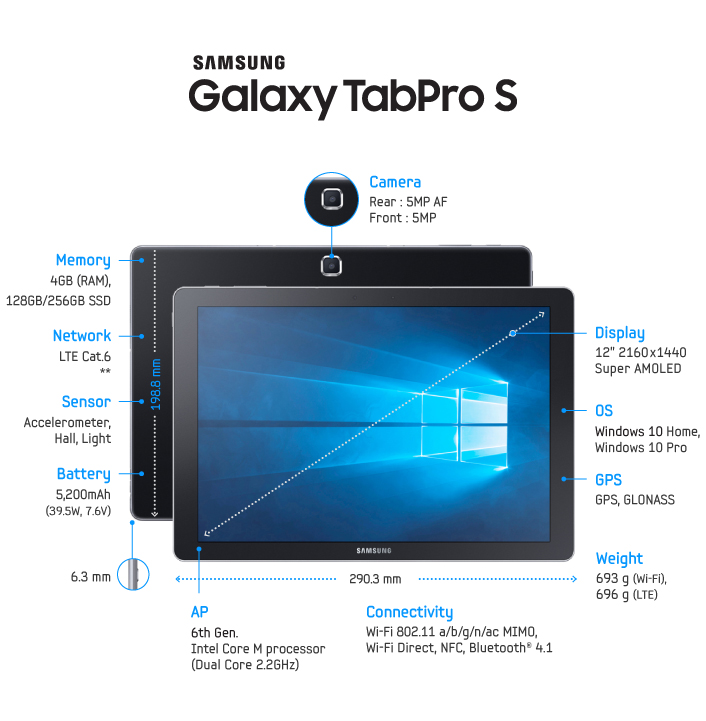