With the launch of its revamped Galaxy A (2016) series, Samsung is bringing more high-end features to its mid-range line up. The middle brother of the three, the Galaxy A5 (2016), seems to exemplify Samsung’s current efforts to (re)gain traction in the more affordable sections of the smartphone market, as we find out by taking an in-depth look at the changes versus its 2015 predecessor – even highlighting some major improvements over the Galaxy S6 along the way. The short version: great hardware and features, but despite its optimized TouchhWiz interface, there’s still a lacking Android effort. For the long version, read on.

Nearly a year ago, the Galaxy A5 was Samsung’s first Galaxy smartphone to feature a full metal body, giving the device a distinctly premium feel. Still, its sharp edges and boring lines kept it from winning any design awards. Whether the Galaxy A5 (2016) will accomplish the latter remains doubtful, but the similarities with the much-praised Galaxy S6 – adding glass to the mix – make it a much more pleasent phone to look at and hold, thanks to the rounded edges. 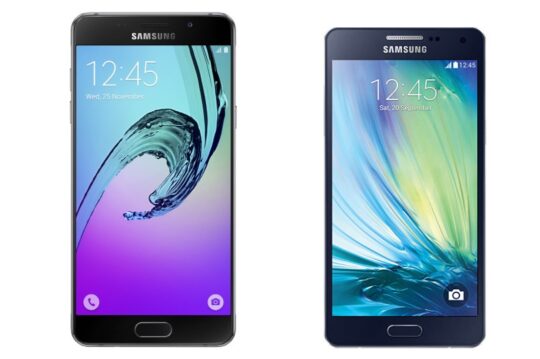 Though the first Galaxy A5 wasn’t very slow in day-to-day use, its quad-core Snapdragon 410 processor was even then a rather mediocre affair. The A5 (2016) is powered by Samsung’s own octacore Exynos 7580 – also used in the Galaxy S5 Neo, in case you’re keeping track – meaning quite a leap forward in performance.

Staunchly unchanged from the original A5 remain the 2 GB RAM and 16 GB of internal storage. Interestingly, though the Galaxy A5 (2016) copies most of the S6’s design, the phone does feature an actual microSD slot, unfortunately hinting that there’s no ultra-fast UFS storage on board. Overall, spec-wise the A5 (2016) offers solid, but not spectacular improvements over its predecessor.

Though the original Galaxy A5 did bring Samsung’s AMOLED technology to a more modest price range, the 720p HD resolution, combined with not-so-accurate color reproduction, made for a decent but not outstanding display.

Though we’re still waiting for any objective measurements, the bump to a Full HD (1080p) resolution suggests a much more pleasing viewing experience – 424 pixels per inch versus 294 – on the Galaxy A5 (2016), making it a good choice for anyone who thinks the Galaxy S6′ 1440p resolution is overdoing it.

And while we’re on the subject of ‘things the Galaxy A5 (2015) does better than even the S6’, let’s talk about its battery. Often, users express the wish for a manufacturer to increase battery capacity, rather than make new phones slimmer. It seems Samsung did exactly that: the A5 (2016) is thicker than its predecessor (7.3 versus 6.7 millimeter), thus fitting a much larger battery (2900 mAh versus 2300 mAh) leaving even the S6 (2550 mAh) far behind. Again, we’ve got to wait until we get a chance to put the device through its real-life paces before drawing definitive conclusions, but chances are we’re looking at a battery life champion here – similar to other recent Galaxy devices like the A8 or J5.

If you assume a camera is as good as its resolution, you’ll find the Galaxy A5 (2016) has no improvements to offer over the first Galaxy A5. You would, of course, be wrong to make this assumption in the first place, and looking beyond both device’s 13 (rear) and 5 (front) megapixel resolutions, a slightly larger f/1.9 aperture and the addition of OIS to the A5 (2016) actually constitute major upgrades. It is possible to start the camera app by double pressing the Home button, which has proven to be a fine little feature on other recent Samsung phones.

The main disappointment here, as far as we are concerned, is the omission of useful camera functions like real-time HDR and the ability to shoot 4K UHD video.

So far, we’ve found the new Galaxy A5 to pack some very sensible features, including OIS, a high-but-not-too-high-resolution display, and a significant increase in battery capacity. Apart from its full metal design and an AMOLED display, the first Galaxy A5 didn’t offer that many extra features to set it apart from other mid-range phones, though it did come with an SD card slot and an FM radio.

The Galaxy A5 (2016) keeps both of these, while adding the fingerprint technology until now reserved for Samsung’s high-end devices, and perhaps 2015’s most underrated funtion: fast charging. Both features are extremely useful, and help make sure that you really get more bang for you buck, should you decide to buy 2016’s Galaxy A5.

Save the best for last, you say? Sorry, no. Despite all enthusiasm we can muster for the Galaxy A5 (2016)’s hardware and features, in the software department things really are as strange as ever, or rather: very similar to last year, when Samsung launched the Galaxy A5 with Android KitKat, despite Lollipop actually being around for months.

The exact same pattern now repeats, with the A5 (2016) coming to market running Android 5.1.1 Lollipop, even though Marshmallow is the de facto standard now. It’s hard to come up with any excuse for this, knowing that everything will be corrected with some future update you’ll probably have to wait months for. For informed smartphone users this will be the most important weakness of an otherwise solid device, though arguably many not-so-well-informed buyers might care somewhat less about version numbers.

Still it’s worth pointing out Samsung’s optimized TouchWiz combined with the faster hardware make for a smooth user experience, regardless of Android version. We’ve seen this on all recent Galaxy phones, and the new A devices are no exception. 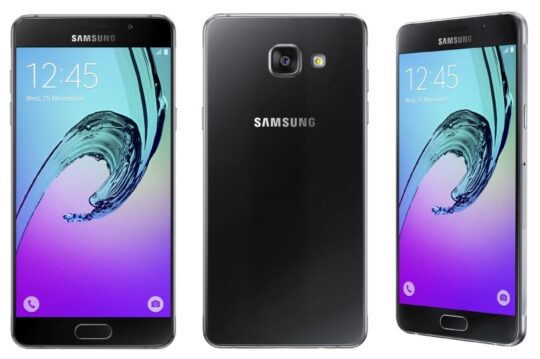 In 2015, Samsung was mostly seen marketing its Galaxy A devices to a young, fashionable crowd. You know, the type that likes thin, metal phones with good selfie camera’s, presumably. We’ve yet to see most of the marketing for the Galaxy A (2016), but the A5 (2016) – and its larger A7 brother – could cater very well to an entirely different group: business users.

Particularly the combination of the fuss-free fingerprint reader and Samsung’s Knox security suite could make this Galaxy A5 revamp an ideal smartphone for business users that are not looking to pay the high prices of many flagship devices. Or, in other words: we can see the promise of top-notch security in a premium looking, but affordable device having a particular appeal to business users.

Taking all of the above in consideration, two things are obvious. First, Samsung is serious about competing in the mid-range smartphone market by combining a premium build quality with plenty of actually useful features. But though its own TouchWiz interface has already improved a lot, speeding up its Android development game does not seem part of the strategy to (re)gain traction in this part of the market.

Still, its design and features do mean the Galaxy A5 (2016) constitutes much more than just an average upgrade over its 2015 predecessor, while even improving on some of the characteristics of the Galaxy S6. Though the Galaxy A5 (2016) won’t start its lifecycle on the market as a cheap device, we all know for most of the year it will be sold for considerably less than its four hundred Euro starting price.