While everyone is waiting for Samsung to announce its upcoming flagship phablet device of the year, Galaxy Note4, there are some people who are waiting for its mid-range cousin, Galaxy Mega2, to enter the spotlight. Earlier today, we received the first ever official firmware of the Galaxy Mega2, which indicates the release is rather imminent. Soon after the firmware article went up, one of our insiders tipped us with some specifications of the Galaxy Mega2.

According to our insider, the Galaxy Mega2 is codenamed “Vasta”, internally, and carries SM-G750F* as its model number. The European variant of the device will be equipped with a 5.99-inch HD (1280×720) Super AMOLED display, an unannounced Samsung Exynos 4 (Exynos 4415) SoC with a Quad-core Cortex-A9 CPU clocked at 1.4GHz, Mali-400MP4 GPU with a clock speed of 533MHz, 2GB of RAM, 12-megapixel main camera sensor with Full HD (1920×1080) video recording at 30FPS, and 8GB of internal memory which is user expandable via MicroSD card slot. Also, unlike recent Samsung devices, the Mega2 doesn’t sport a fingerprint scanner neither a heart-rate sensor.

We at SamMobile cracked opened the official firmware of the device and the build.prop file confirms that the European Galaxy Mega2 (SM-G750F) does indeed pack an Exynos 4415 SoC. 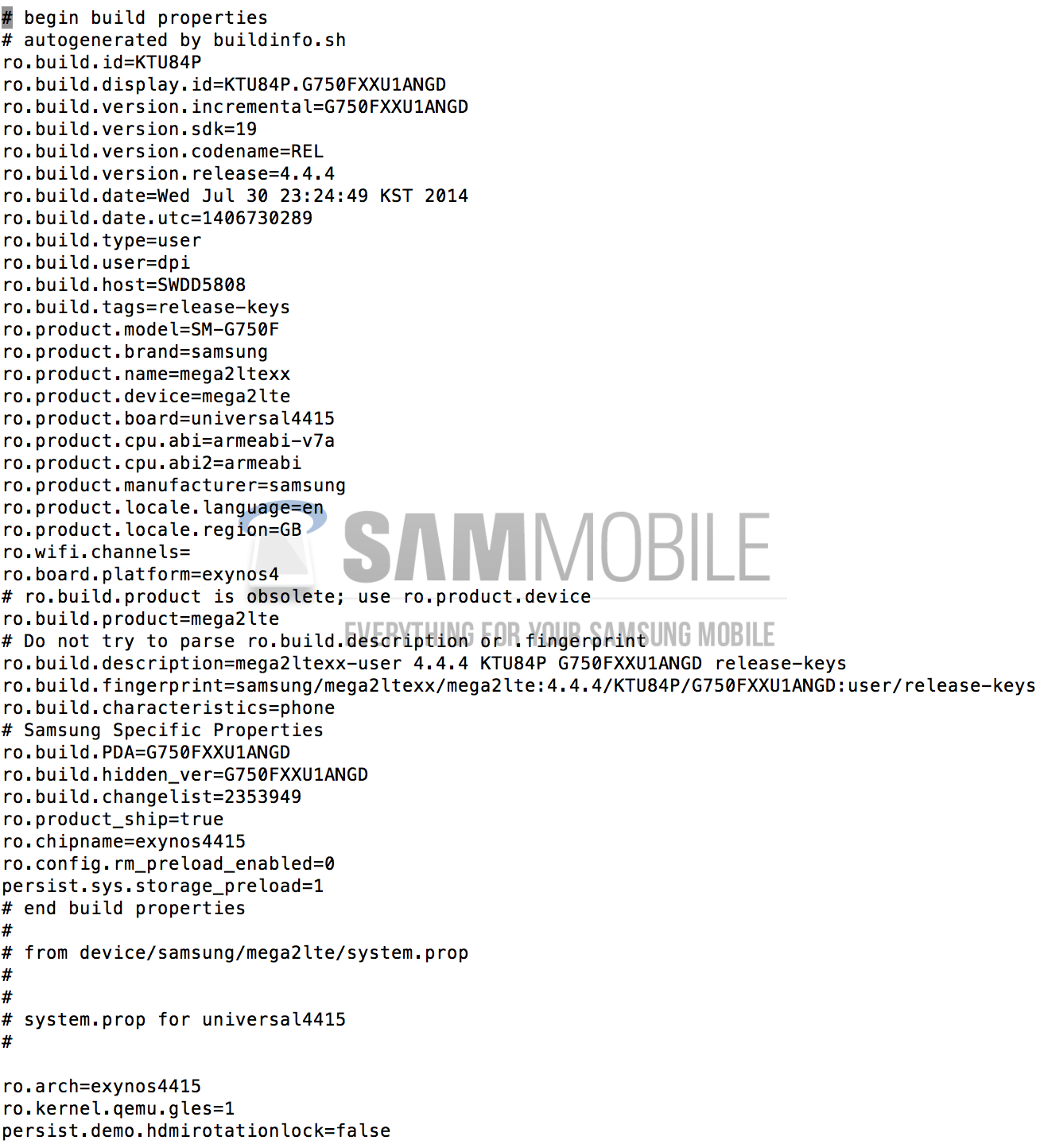 Software-wise, the phablet will come with Android 4.4.4 KitKat and Samsung’s latest Magazine UX, same as on the Galaxy S5 and Galaxy Alpha, out of the box. Insider also reports that Samsung has bundled many new software features, which are supposed to help the user with one-handed usability. One of these software features in Easy Side Panel, this feature enables on-screen navigation buttons on the right/left side of the display, depending on the primary hand of the user.

This was all the info our source was able to provide at the moment, and we aren’t aware of any release timeframe, but we will keep you folks updated as soon as we receive new intel on the mid-range phablet.

UPDATE: It looks like the Mega 2 will be coming in two flavours, Exynos and Snapdragon. Our source has just confirmed that Samsung is also preparing a Snapdragon variant of the device, which will only be available in selected markets, mainly China. However, the Exynos one will be the most widely available variant of the two.

We were also told that Samsung’s Exynos 4415 SoC comes with integrated LTE, as well.