Well, it’s the sleepy start of a new week, and a new Samsung phone has managed to make an appearance in the wild to further distort the company’s already confusing lineup of upcoming devices. A Samsung SM-G906A has been listed in the AnTuTu benchmark database – SM-G906 has been associated with the Galaxy S5 Prime, but the presence of a 1080p display in the benchmark listing suggests this could be another device as the S5 Prime is more than likely to feature a QHD (2560×1440) display. There’s also the possibility that the display resolution is wrongly mentioned, as other specs in the benchmark – Android 4.4.3, 16MP camera, and a Snapdragon 801 processor – match up with the rumored specs of the Galaxy S5 Prime (though the S5 Prime might be powered by a Snapdragon 805 CPU upon launch.)

It’s also possible that the SM-G906A is some other variant of the Galaxy S5 – for now, we’ll have to be on the lookout for more info on the matter, before we can paint a clear picture of just what is going on in the development wings of Samsung. 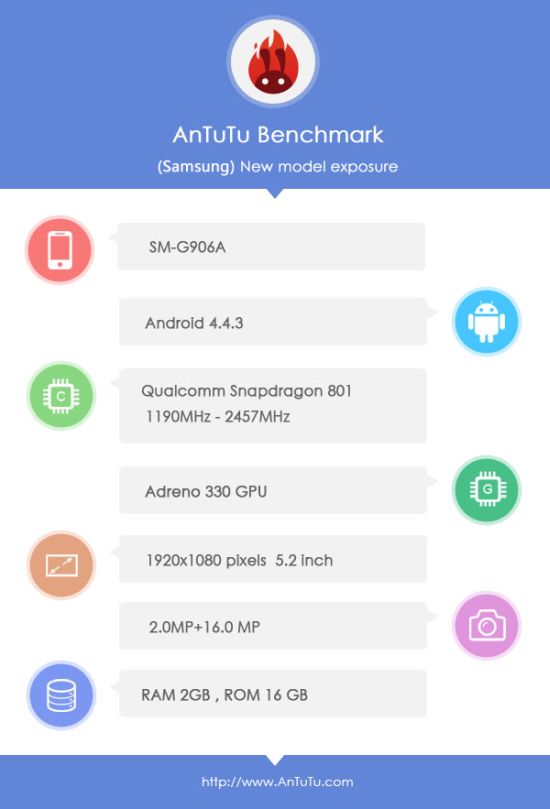 By now there have been countless rumors and leaks about the Samsung Galaxy F. This smartphone is believed to be the metal-touting variant of Samsung’s existing flagship. Today a purported first live photo of the Galaxy F has leaked online which gives us an idea of what this device may look like outside of renders. […]

According to a new report from The Korea Times, Samsung is preparing to launch a new flagship phone in South Korea. Major carriers in the country are set to roll out an upgraded LTE-A network that can achieve speeds of up to 225Mbps, as opposed to just 150 Mbps that is supported now, and Samsung’s new […]

We’ve seen the Galaxy F in the past few days but this is the first time we’re seeing the device snapped alongside its elder sibling, Galaxy S5. While there’s not much to tell from the image, we do see the rumoured Galaxy F sporting a thinner bezel compared to Galaxy S5. According to the previous […]

The premium Galaxy F line has been rumoured for quite some time and the new images leaked by PhoneArena lend some credence. We cannot confirm if the ongoing Galaxy S5 Prime rumours and the ones about the Galaxy F lead to the same device but it’s an interesting leak nonetheless. The images were published over […]

Google pushed the trigger on the Android 4.4.3 update yesterday, and it has already begun rolling out to the Google Play edition of the Galaxy S4 (GT-I9505G), the variant of Samsung’s 2013 flagship that runs a stock version Android. The update has started showing up on devices in the last couple of hours, and should […]