After months of leaks and rumors, the Ativ SE is official. Originally though to be unveiled during Microsoft’s BUILD conference in San Francisco, the Ativ SE launched directly on Verizon. The device runs Windows Phone 8, comes with a 5-inch full-HD screen, 13 MP camera, Snapdragon 800 2.3 GHz quad-core CPU, 2 GB RAM, 16 GB internal memory and a 2,600 mAh battery. The Ativ SE also features an IR blaster, which in conjunction with Samsung’s WatchON works as a remote control for your TV. Other connectivity features include Wi-Fi ac, Bluetooth 4.0, NFC, DLNA and Wi-Fi Direct. The device works on Verizon’s LTE network and is available for $599 without a contract and $199 on a new two-year contract.

Verizon is sweetening the deal by offering a buy one get one initiative with the Ativ SE. customers buying the Windows Phone handset will be eligible to get another Ativ SE free, or choose a Galaxy S5 or HTC One (M8) for free on a new two year contract. Verizon mentions that the device ship starting April 12th. Head over to the link below to pre-order the device. 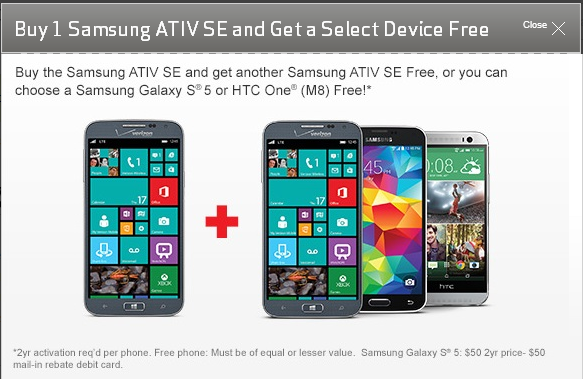 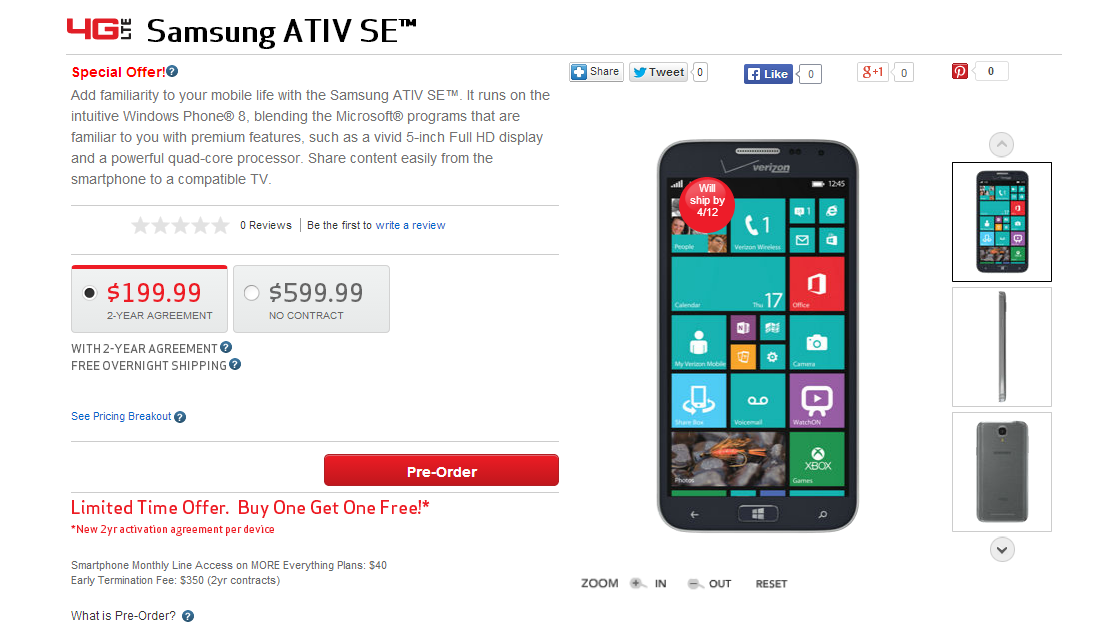 The ATIV SE, Samsung’s first Windows Phone handset in what feels like an eternity, has been making appearances quite frequently in the last few weeks, but full details on its hardware have remained a mystery through all the leaks. That’s changing today, thanks to The Verge, who have managed to obtained exclusive information on the […]

Samsung’s new Windows Phone 8.0-based handset, the ATIV SE, has been cropping up in leaks increasingly as of late, and now we finally have a rumored launch date for the device. According to WPCentral, the ATIV SE will be arriving on Verizon on April 18th, with a price tag of $599 attached to it for […]

The Ativ SE is a Windows Phone device that is exclusive to Verizon. Last week, a press render of the device leaked by @evleaks revealed the UI as well as the fact that the device features a 5-inch (or larger) full-HD screen. The image also showcased resizable Live Tiles, which is a feature added in […]

The ATIV SE, Samsung’s upcoming Windows Phone device for U.S. carrier Verizon, has been revealed in a press image leaked by the ever-enterprising @evleaks. We’ve seen images of the phone before, but this is the first time we’re seeing one with the Windows Phone UI visible as well. The image confirms that the device will […]

Samsung is said to be working on a Windows Phone handset codenamed Huron (SM-W750V). The handset has cleared FCC, and from the leaked images, will be exclusive to Verizon. The device was rumored to be officially announced at the Mobile World Congress earlier this week, but it was not to be. According to @evleaks, the […]