Each Galaxy S flagship’s official announcement is followed by months of frantic speculation and rumor-mongering, but it wouldn’t be an understatement that the frenzy for the Galaxy S5 was unlike anything we’d seen with previous iterations. So it was with some excitement that we sat down at Samsung’s Unpacked event to get our first official look at the S5, and as we said in our preview, we were pleasantly surprised by what we saw at the announcement. 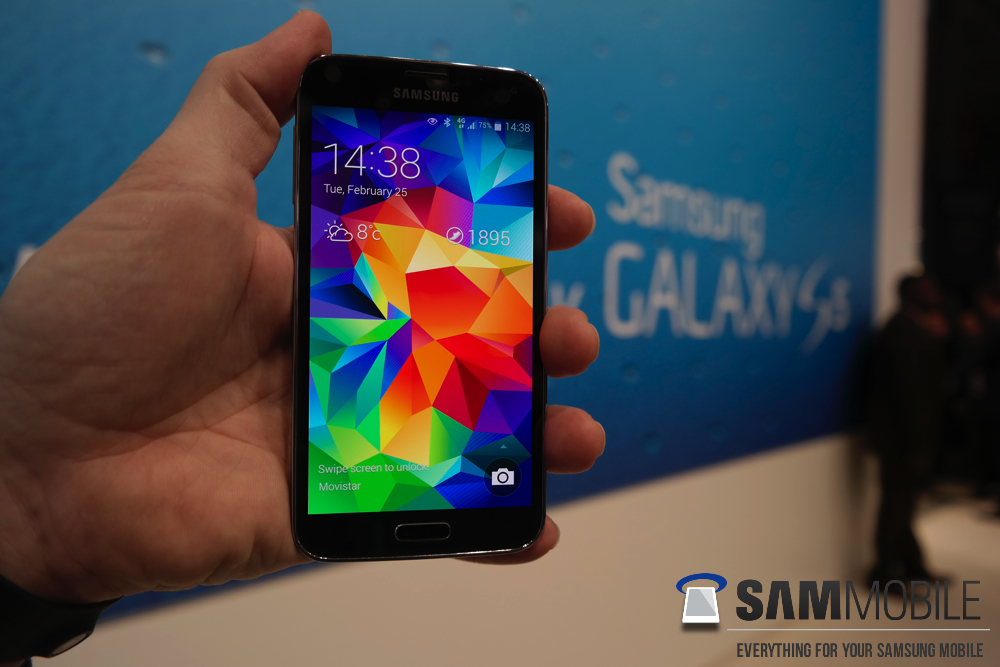 In terms of design, at least from the front, you would be hard pressed to differentiate the S5 from the Galaxy S4, but that’s not exactly a bad thing when you consider the beautiful display from the S4 has been further enhanced, with the same image quality with high-contrast colors and sharp viewing angles offering a display experience not found on other companies’ flagships (though that’s not exactly a comparison we should be doing, as only Samsung uses AMOLED displays.) The screen has grown in size by a mere 0.1-inch to 5.1-inch, which means the Full HD (1920×1080) resolution makes it extremely sharp. The phone is also water-resistant with IP67 certification, but the overall size has remained mostly the same as the Galaxy S4’s.

Below the display, there’s Samsung’s trademark hardware home button, which now acts as a fingerprint scanner. Samsung’s implementation of the scanner is different from Apple’s: a user must swipe his/her finger over the home button, covering the entire surface of the button. Apart from unlocking the phone, the fingerprint scanner can be used to make PayPal payments, and access a special mode that includes a few private files you don’t want anyone else to see. It’s quite accurate at detecting your fingerprint, and works pretty fast – people had thought Samsung would mess up its implementation, but it’s great to see that hasn’t been the case.

Of course, as has been said a lot in the media, the back of the Galaxy S5 brings something new to the popular Galaxy S lineup – instead of the hated and slippery glossy plastic, the back cover is now faux leather with a dimpled design that feels great in the hand, and contributes to the convenience of using the phone considerably. Color options include black, white, blue and gold for the back, and while it may not look that good in pictures, the blue version was rather stunning in person. Overall, the design is now better, and while we still wish Samsung would adopt a new design language for its flagships, we feel the overall design is at a very mature stage with the fifth-generation.

Internally, the Galaxy S5 is as advanced as one would hope a 2014 flagship to be – there’s a 2.5GHz Snapdragon 801 processor, 2,800 mAh battery, a 16-megapixel camera with a focus on features like fast autofocus and enhanced HDR photography, and the latest version of Android with a newer version of Samsung’s Nature UX (more on that below.) However, there are a few odd downgrades compared to the Galaxy Note 3 from last year – there’s only 2GB of RAM instead of 3, and Samsung has gone back to putting only 16GB of internal storage on the base model. These are rather adequate, true (especially the lower amount of RAM, as the S5 won’t have the additional features found on the Note series, like Air Command or other stylus-specific features), but it’s still an odd move to see Samsung’s newer flagship taking a step down in some areas compared to the previous flagship. 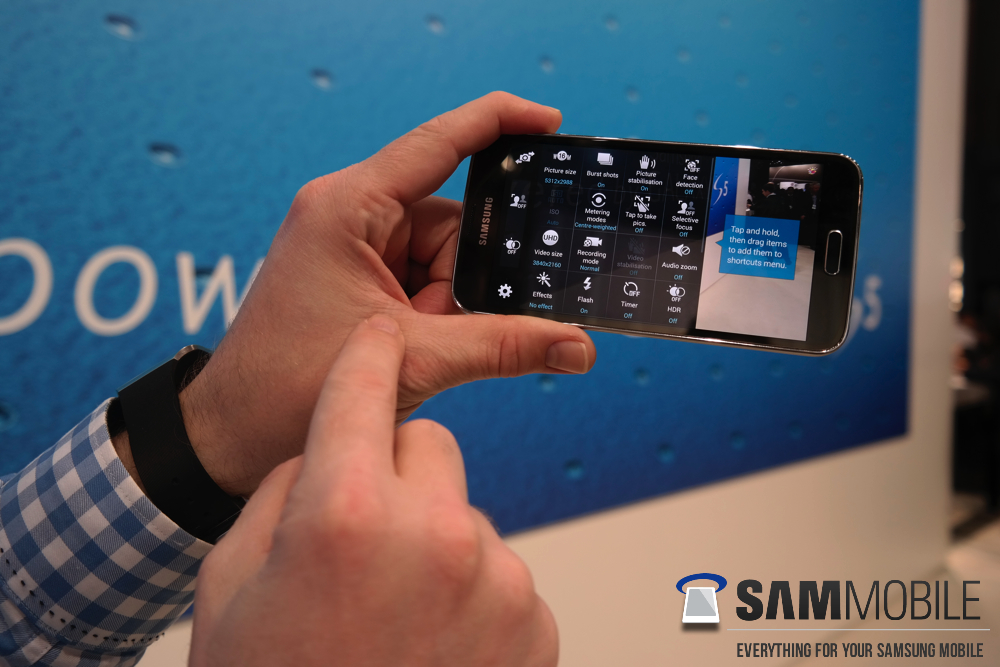 As mentioned above, the Galaxy S5 features an improved version of Samsung’s infamous Nature UX skin (we’re not sure if Samsung is still calling it Nature, so we’ll just go with calling it TouchWiz as we’ve always done. While a lot of the interface has remained the same, there are quite a few changes in some areas. The notifications menu has been redesigned (it’s similar to the one on Samsung’s new PRO line of tablets) with rounder, flatter icons that look pretty good, some apps including S Health, Gear Manager and others have been given a flatter, more attractive look, and even the recent apps screen has been given a makeover (a rather ugly one, if we’re honest.)

The settings menu no longer has the inconvenient tabbed menu that Samsung adopted in the Galaxy S4. Now, in its default form, it’s a list of various settings menus with their icons in a vertically scrolling list – the default view is rather confusing, with big icons and not an easy way to detect which option is where, but thankfully it can be changed to a list view that shows the traditional settings menu that is available on stock Android and competing devices.

In terms of features, there’s Kids Mode, that allows you to lock things down and customize a separate environment for your kids, like limiting the number of people they can call or the apps they can use, with a dedicated app store for both fun and learning for the little ones. But even more useful is Ultra Power Saving Mode – enabling this mode will disable the color output of the display, turn off data when the screen is off, and turn off location services to save battery, and can, in theory, offer up to a day of usage in just 10 percent of battery. It’s impressive, and it’s something we hope works well in actual usage and comes to Samsung’s previous devices through a software update. 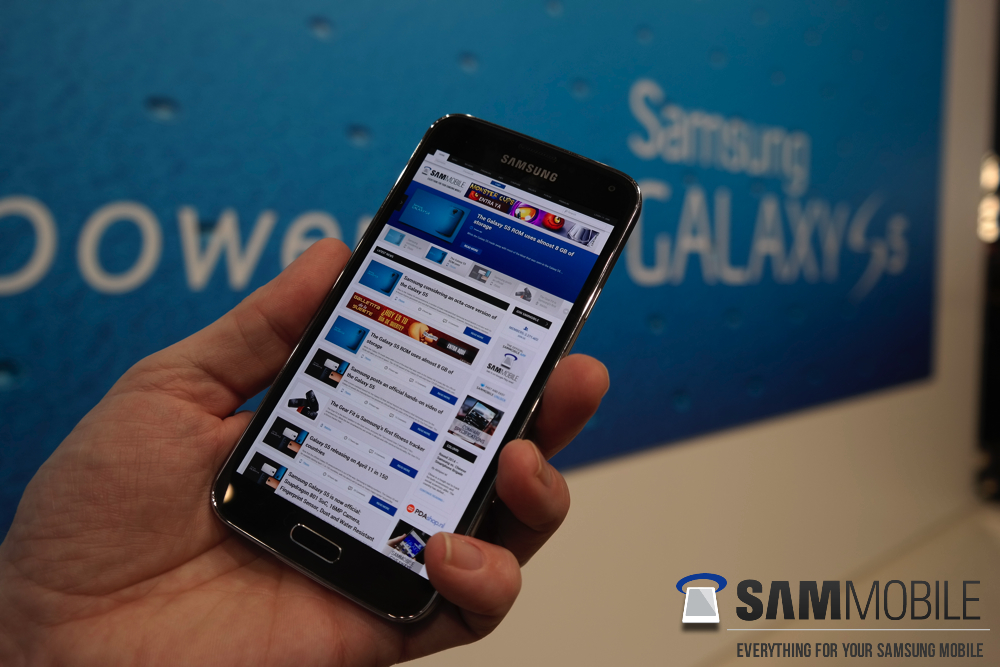 Elsewhere, there are new modes in the camera, including Selective Focus for modifying what parts of an image are in focus, version 2.0 of KNOX that is now more secure and flexible, though we’ll have to give the phone a more thorough playthrough to find out everything that’s new or changed. However, in our time with the device, we found the software to be massively improved (the demo units were slow, but we found the phone to be rather fast in our exclusive hands-on with a model that was running on a more final version of the software) – there’s less dependence on adding lots of features that most people will ignore, and more on adding features that genuinely improve the experience (like Kids Mode, the fingerprint scanner, new power saving mode, etc.)

Overall, the Galaxy S5 is a great addition to the Galaxy S lineup, and is a good upgrade especially for those that are currently using a Galaxy S III and are approaching the end of their two-year contracts. The internals have been upgraded, the software has been refined with improvements in visual design and some truly useful features, and things like the fingerprint scanner, 16MP camera, and a dedicated heart rate sensor put it a step above the competition (at least for now, we’ll see what HTC does with the successor to the One.)

Of course, the similar design will continue to put off folks, but in the end, the S5 will sell in millions like its predecessor. Innovation in the mobile world has come to a standstill at the moment, but in terms of iterative upgrades that make for an improved experience, the Galaxy S5 is a worthy sequel to Samsung’s flagship line. It will launch worldwide in more than 150 countries on April 11, and we’ll taking a much closer look at the device in our final review then, but if we were to give an early conclusion, we’d say the Galaxy S5 has what it takes to take the Android flagship race to the next level.