The Galaxy S4 was given a lot of flak for using up a lot of the total internal storage for system files, leaving only around 9GB for user data on the 16GB variant. The folks over at Android Central then revealed that available storage space was even lower on the Galaxy S5, indicating that the company has failed to trim down the bloat of its software. However, that’s not the case, as Telekome-presse found out: the Galaxy S5 on display at MWC was simply using up an extra 2.33GB for the demo content related to Samsung’s Unpacked event, demo content that will not be present in the retail version of the device.

It’s a normal scenario for display units in retail stores as well, which store video and audio files to show off the device’s features to consumers, and was the reason for the confusion regarding the Galaxy S5 as well. In fact, Samsung has reduced the amount of storage its software takes up, with the Galaxy S5 offering 10.7GB of storage for user files such as apps and media, which could go even higher when the company is done optimizing everything on the final version on the phone. Granted, this is still quite a bit lower than the available storage on devices like the Nexus phones, but it’s ultimately a trade-off that has to be made for some of the useful features that Samsung offers on its devices.

When you factor in the availability of a microSD slot and the option to move apps to the external storage on Samsung devices, an option not available on the stock version of Android, it’s pretty easy to see that the Galaxy S5 won’t be presenting any issues related to the available internal storage space. 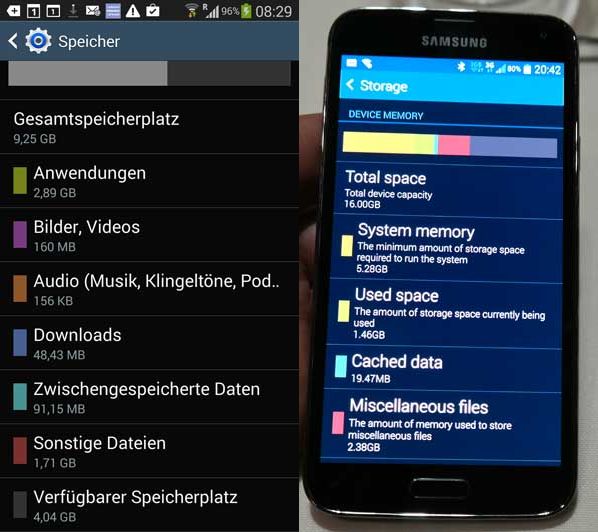