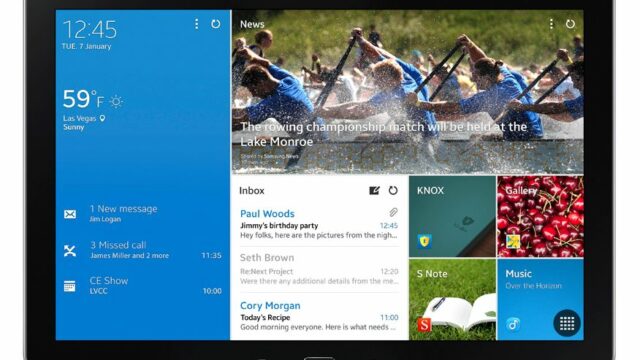 Samsung’s new Magazine UX, which offers a beautiful and rather different take on the traditional Android homescreen on the company’s new Galaxy NotePRO and Galaxy TabPRO tablets, cannot be turned off in its entirety, according to a Samsung spokesman talking to Computerworld. While the tablets will offer the standard Android homescreen functionality of adding multiple screens and filling them with shortcuts and widgets, at least one Magazine UX screen will be permanently present at all times.

The spokesman gave the following statement on the matter:

Users do not have the option to ‘turn off’ Magazine UX. It is built into the Pro series tablets. Users can add or delete Magazine UX and standard Android screens as they wish, but at least one Magazine UX screen must be present at all times. The ‘classic’ home screen is standard, with the Magazine UX accompanying it. And of course, users can change this and set Magazine UX as the default.

For users of Samsung’s devices, this shouldn’t really come as a surprise, as the Korean manufacturer is already quite unpopular for filling up its devices with apps that cannot be disabled, though this time it’s not exactly an app that can’t be turned off, but a part of the homescreen. Those using third-party launchers wouldn’t need to worry about this limitation, but for those that don’t want an HTC BlinkFeed and Windows Phone-inspired homescreen on their tablets, well, it might be quite the irksome limitation.

December security patch makes its way to the Galaxy NotePRO 12.2 in Eu …

Galaxy NotePRO 12.2 for AT&T approved by FCC, could launch soon