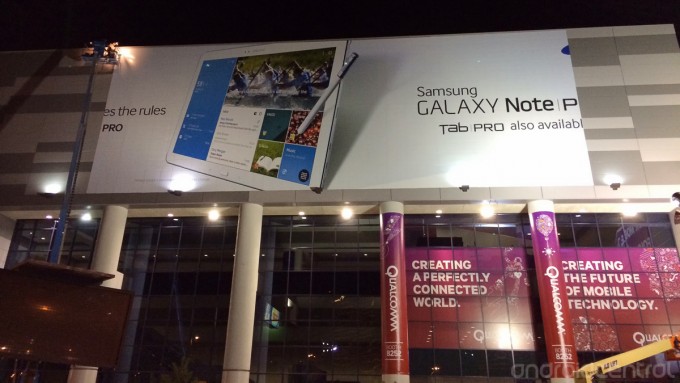 We’ve been seeing a lot of appearances from Samsung’s upcoming PRO line of tablets, and now both the Galaxy Note PRO and Galaxy Tab PRO have been confirmed by the company itself – well, Samsung hasn’t officially announced them yet, but billboards being put up at the company’s CES event pretty much seal the deal and confirm that both tablets will be announced at the three-day electronics show.

As we’ve confirmed before, Samsung will be launching the Galaxy Note PRO and Tab PRO (8.4 and 10.1-inch models) in February, and various leaks in the last few days have revealed that all of them will be high-end models (unsurprising considering the PRO tag.) The Galaxy Note PRO will have a 12.2-inch screen and, as befits the Note series of devices, carry an S Pen stylus; at least the Note PRO and Tab PRO 10.1 will have 2,560×1,600 resolution screens, and all three tablets will be available in the standard white and black color options.

Samsung ended the constant flow of Galaxy S21 FE leaks and rumors earlier this week. The new Fan Edition device got announced in Las Vegas on January 4, and it could be described as a mixed bag in that it offers a good combination of specs and features, though we believe that Samsung may have […]

Samsung showed off an interesting product during its CES 2020 keynote today in Las Vegas. It kicked things off with the Samsung Ballie, a small rolling robot that gives off major BB-8 vibes. For those who don’t get the Star Wars reference, Ballie will follow you around in the home and help out with tasks. […]

Following reports that Samsung would reveal a zero-bezel TV at CES 2020, the company has now revealed its flagship model for the year. The Samsung Q950TS 8K TV has a stunning, super-thin form factor with 8K resolution and surround sound audio. Given its lack of bezels, the picture on the TV would appear as a […]

Samsung is expected to raise the bar for premium TVs at CES 2020 next month. According to reports, Samsung is going to unveil the world’s first true Zero Bezel TV at the trade show in Las Vegas. Reports from South Korea suggest that this new premium TV has already received a “two-thumbs up” from Kim […]