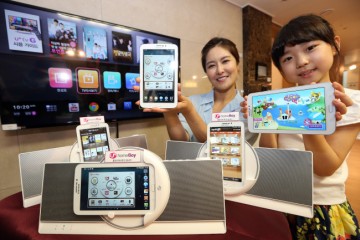 Now this is interesting. LG has launched a 7-inch tablet called the Homeboy in South Korea, a tablet made by, well, Samsung. Now before you go wondering how in the seven hells that is possible, it’s to be noted that LG is also a wireless operator in the country, and this is solely a relationship between the wireless operator part of LG and Samsung, which has resulted in the Homeboy (which looks to be a re-branded Galaxy Tab 7.0).

The Homeboy is described as an alternative to Amazon’s Kindle and is being touted as a “smart-home devices to replace conventional home appliances”, and will let Koreans “access some 50 TV channels, movies, millions of music tracks and tens of thousands of e-books.” As a result of being a sort of home appliance device, the Homeboy also acts as a CCTV – a camera on the Homeboy allows one to observe the inside of their house from their smartphone, though of course that requires you to leave that Homeboy at home.

Again, it’s interesting to see LG joining forces with Samsung to launch the tablet, though it’s not exactly surprising considering LG doesn’t currently make tablets on their own. That’s supposed to change soon with LG’s rumored G Pad, but for now, it seems like re-branding a Samsung tablet and putting it on market was the only way to go.