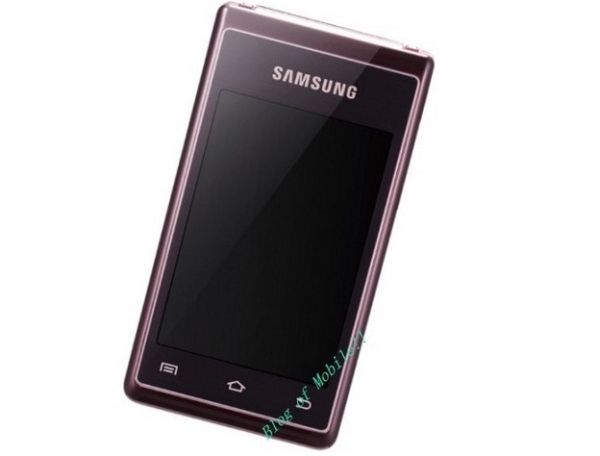 Do you fondly remember those days of flip phones with numeric keypads (that were great in letting you enter phone numbers quickly without having to open a dialer and stuff) and would like a phone just like that but with a touchscreen to go along with it? Well, Samsung has your back with the Hennessy, a clamshell phone that runs on Android.

The Hennessy, model number SCH-W789, has made an appearance in the past and is supposedly headed to China Telecom. It has two displays, both 3.3-inch units with a resolution of 480 x 320 (ugh!), on the inside and outside, with a numeric keypad available when you flip the phone open. While the display may sound unimpressive, this cute little thing is supposedly powered by a quad-core processor clocked at 1.2GHz (probably a Snapdragon 200) and has 1GB of RAM, which do somewhat salvage the situation.

There’s a 5-megapixel camera on the back, microSD and dual SIM slots, and it runs on Android 4.1.2 Jelly Bean, another saving grace of this experiment Samsung is indulging in. Oh, and did we say it comes in a Luxury Gold color? Yep, just because this is a device that won’t really interest more than ten people around the world, Samsung isn’t going to miss the chance to make it sound as dazzling as is humanly possible.

The Hennessy is supposedly set for an August launch in China and Korea, and you’ll probably have to make a visit to those two nations to grab one for yourself. Well, that’s assuming you actually want one.

Samsung Hennessy (SCH-W789) flip phone to cost $800, makes for one of the worst deals ever

Samsung made a lot of people nostalgic while making others shake their heads in denial when they made the clamshell Hennessy smartphone official, but it looks like Samsung is taking the chance to charge an exorbitant fee for what can best be described as a phone in the lower mid-range segment – according to some […]

A remnant of a time long past, Samsung’s “Hennessy” clamshell flip phone, press images of which were leaked yesterday, has now been officially listed on the manufacturer’s Chinese website. Oddly, the device is simply named W789, which indicates even Samsung was hard pressed to come up with a suitable name for the phone. In terms of […]

We got to first know about Samsung’s SCH-W789 (Hennessy) last month through a leak. We also posted detailed specs on our Twitter account earlier this month and now Sammy Hub has published new pictures of the device showing it from every angle. Going by the specs and images, the device seems a mid-range one and […]