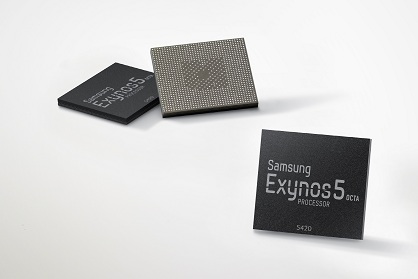 After a whole week of teasers, Samsung has finally announced its new Exynos 5 Octa SoC. The new Exynos 5 SoC, codenamed Exynos 5420, is based on ARM Mali-T628 MP6 cores. Samsung’s new SoC is the industry’s first AP to be driven by a 6-core GPU. Exynos 5420 features quad Cortex-A15 cores clocked at 1.8GHz with additional quad Cortex-A7 cores with a clock speed of 1.3GHz in a big.LITTLE implementation. The new configuration allows the AP to be 20 percent more powerful than its predecessor, claims the Korean giant. Exynos 5420 enables fast data processing and Full HD WiFi display support, thanks to its Dual-channel 933MHz LPDDR3 memory (14.9GB/sec).

The new Exynos 5 Octa SoC is already being tested by Samsung’s customers, and its mass-production is scheduled in August.

The newest Exynos processor is powered by four ARM Cortex®-A15™ processors at 1.8GHz with four additional Cortex-A7™ cores at 1.3 GHz in a big.LITTLE processing implementation. This improves the CPU processing capability by 20 percent over the predecessor by optimizing the power-saving design.

In addition, the multiple image compression (MIC) IP block inside this System-on-Chip successfully lowers the total system power when bringing pictures or multimedia from memory to display panel. This feature results in maximizing the usage hours of mobile devices with a high-resolution display such as WQXGA (2500×1600), in particular when browsing the web or doing multimedia application requiring the frequent screen refresh.

The new family of Exynos 5 Octa is currently sampling to customers and is scheduled for mass-production in August.

Folks over at Samsung Exynos have just started to post teasers for their event at CES 2014 in Las Vegas. As al …

Heterogeneous Multi-Processing will be integrated in Exynos 5 Octa

One of the issues we had with Exynos 5 Octa was the inability to support Heterogeneous Multi-Processing (HMP). …