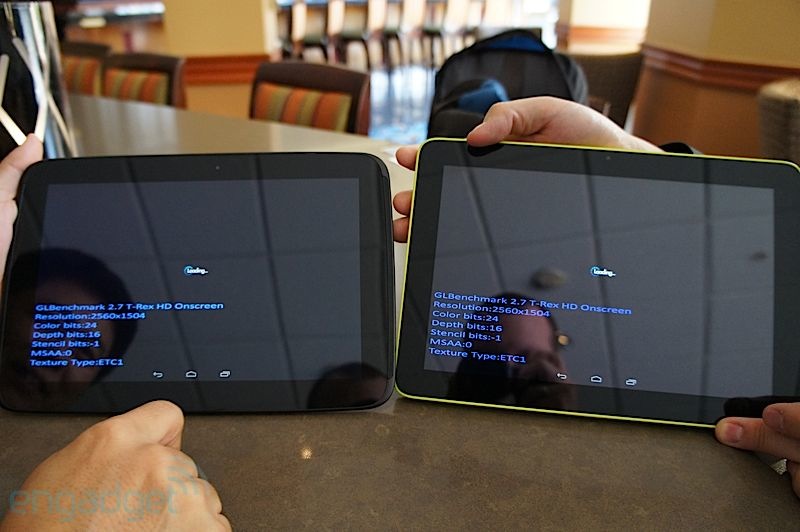 Yesterday, Samsung announced the new Exynos 5 Octa (Exynos 5420) chip based on ARM Mali-T628 silicon. The new AP is 20 percent more faster than its predecessor (Exynos 5410), claims Samsung. However, the most significant change is the graphics processing unit, it’s the industry’s first SoC to feature a six-core GPU.

Engadget got some hands-on with a prototype device featuring the new Exynos 5420 SoC over at SIGGRAPH 2013. Samsung put the prototype up against a Nexus 10 in a benchmark fight, and the prototype crushed it! Currently, Nexus 10 is the only device to pack the most powerful GPU, packing an Exynos 5 Dual (5250) SoC with Mali-T604 GPU, so comparing the Exynos 5420-packed prototype with a Nexus 10 was certainly the right choice.

As you can see from the video, the prototype scored almost double the points as of the Nexus 10. During the benchmark, the prototype was smooth as silk with no issues whatsoever, while the Nexus 10 was a struggling. We are looking forward to seeing the new Exynos 5420 go up against the Exynos 5410 and the Snapdragon 800 SoCs.

When Samsung announced their latest Exynos octa-core chipset, the Exynos 5420, everyone naturally assumed it would be powering the Galaxy Note 3. However, Samsung didn’t exactly mention it officially, but an image sent to us by a tipster confirms that it is indeed the Exynos 5420 powering Samsung’s latest, and perhaps greatest, phablet. The screenshot […]

By now it’s pretty common knowledge that Samsung’s Exynos 5 Octa isn’t really a true eight-core chip, only allowing either four low-power Cortex-A7 cores or four high-performance Cortex-A15 cores to be active at any time. So when Samsung announced that its Exynos Octa chip would soon be gaining the ability to use all eight cores […]

Samsung confirmed the development of Heterogeneous Multi-Processing (HMP) yesterday and ARM has now posted few videos showcasing HMP’s capability. The videos show how Exynos 5 Octa 5420 can use all or some of the cores, which in this case, they run QuickOffice and Angry Birds Rio. The third video also shows how big.LITTLE can work […]

Heterogeneous Multi-Processing will be integrated in Exynos 5 Octa

One of the issues we had with Exynos 5 Octa was the inability to support Heterogeneous Multi-Processing (HMP). Now Samsung has confirmed that its Exynos 5 Octa with ARM’s big.LITTLE technology will support Heterogeneous Multi-Processing (HMP). In simpler terms, with HMP, the SoC will be able to use all eight cores at once or just […]

In the OCTA-pella video, you’ll see how the Exynos 5 Octa uses ARM big.LITTLE processing to balance workloads across CPU cores, using the right core for the right task.