RUMOR: Samsung to unveil the Galaxy S4 mini this week 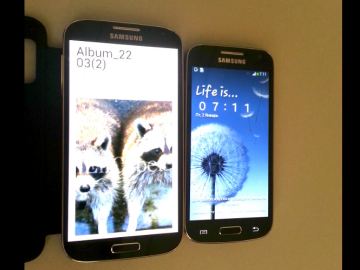 We received some latest information regarding the Galaxy S4 mini. According to the insiders of SamMobile Samsung wants to introduce the Galaxy S4 mini this week. Since the pictures already been leaked onto the internet, and the most specifications already are known Samsung decided this. The Galaxy S4 Mini needs to hit the stores from the end May begin June.

Funny to know 2 years ago Samsung announced the Galaxy S II with a 4.3” Diplay. From this week is 4.3” mini!

The Galaxy S4 Mini Duos GT-I9192 has started receiving Android 4.4.2 KitKat OTA update but it is currently limited to Russia, though, you can download the update (software build I9192XXUCNG2) and flash your device manually. It’s quite puzzling to see that Samsung has released the KitKat update for Galaxy S4 Mini Duos and Galaxy S4 Mini Black Edition but […]